Carpet Wargaming Over The Weekend

A quiet weekend has just passed here at the 'Vultures Roost' with the management away up seeing her family. This left yours truly in charge of boy (Alex), dog (Jed), rabbit (Tampa)and hogs (guinea pigs called Chocolate and Peanut). Deciding to take advantage of the cheap cinema tickets available on a Saturday morning Alex and I went and saw Monster versus Aliens at the bargain price of £1 each. Quite an entertaining film' although a bit scary in places for some of the younger children in the audience. In the afternoon I dug out a huge box of 25mm Citadel Spacefarers that my good friend John Elwen has left (on loan) with me to use as I want. The painting on them is fine, although the bases needed some attention. I'm part way through apply basetext all 200+ of them at the moment ! Anyway, here's a few photos of a carpet battle we did in our lounge. Alex took the clean-living god-fearing Imperials (in white), while I attacked with the Mercenary space scum ! :)
-

A haul of Anglo-Saxon treasure recently unearthed in Staffordshire (in the UK) has been valued at £3.285m. Link
-
Posted by Vulture at 19:08 No comments:

This is clip from one of my favourite comedies, The Money Pit. It always makes me smile :) This is a scene where Tom Hanks (playing Walter Fielding Jr.) is cooking and heating up water for a bath in the renovation-bomb house he bought with his wife. Things don't go quite as planned...
-

This is an interesting news clip about the latest Drone Plane developed in the UK. Link
-
Posted by Vulture at 23:18 No comments:

Well, after a couple of evenings work I've finished painting both the Peter Pig 'Bomag' dropships I got a week or so back. Very nice little models to work with.
- 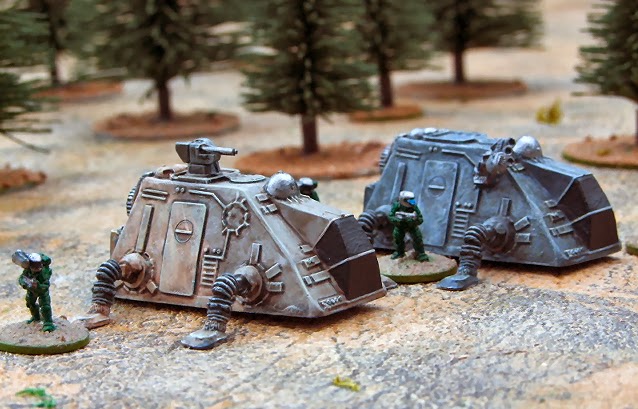 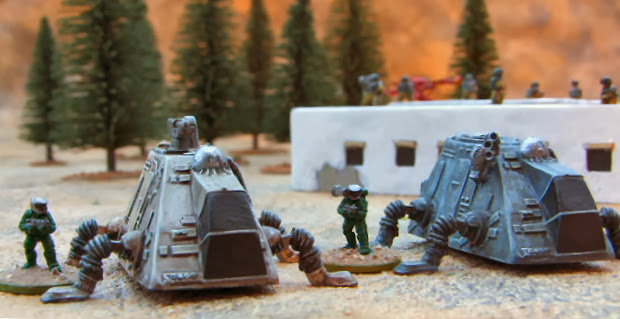 Busy painting up one of my Bomag Dropships (made by Peter Pig). Not quite ready to photo just yet, still got the highlighting to do. In the meantime, here is an interesting link to a tour of the world's fastest steam car. Link
-
Posted by Vulture at 21:24 No comments:

It seems there is a movie in the works about the Ultramarines. It is described as a 70-minute sci-fi thriller that will use CGI and state-of-the-art animation production techniques. Games Workshop will be working with a UK-based production company Codex Pictures, who have the momentous task of bringing the Warhammer 40,000 universe to the screen. Check out this link.
-
Posted by Vulture at 19:31 2 comments:

This is one impressive vehicle...
-

For those who haven't seen them here is a list of links to the Stop-Motion movies I've uploaded to U-Tube. My latest movie with the walkers I've taken with a different camera (Fuji S100), which has a far better manual shutter release system, and that has encouraged me to up the frame rate considerably.

3. The 3rd Mech Company Depart For The Front Link

7. When All Is Quiet Link

Today I completed my latest Stop-Motion movie. I've been working on this since I finished off painting a platoon of Critical Mass Games walkers last weekend. I've shamelessly used the soundtrack from an old video game intro, which I feel gives it a good atmosphere. Hope you enjoy it.
-

I recently picked up from other sites including the excellent Dropship Horizon that Peter Pig were going to cease production if their small sci-fi range, 'Range 9'. Not wanting to miss out on having a couple of their Bomag Dropship in my 15mm collection, I placed an order on the Internet on Wednesday evening, and had the goods delivered today. The Dropships are quite small, (you might get four men in them) the body is made of resin, with the legs and weapon pod in metal. Very straight forward to assemble; I was surprised at how strong the leg arrangement is. I hope to get some paint on them tomorrow. I also bought one bag of assorted crewmen, and have to say that they are really really nice. The sculpting is excellent.
- 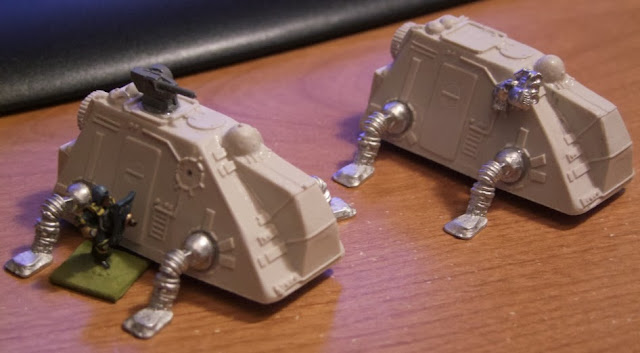 Sci-Fi Weaponry About To Be Fielded ! 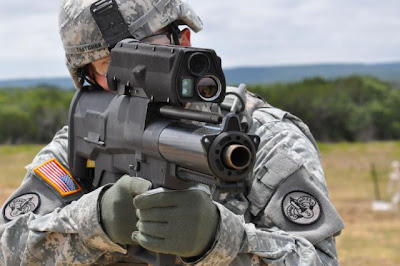 Army testing XM-25 'smart' high-explosive weapon for Soldiers.
Check out this article all about the US armies new weapon, the XM-25. Link
-
Posted by Vulture at 23:19 2 comments:

Well, the rare earth magnets I ordered off E-Bay arrived yesterday, and I set to work straight away fitting them into Walker that didn't have the torso glued to the hips. My modelling drill has gone MIA so I had to resort to carving the void out in each resin part using a modelling knife. What a totally balling aching job ! LOL, but eventually after an hour or so the magnets would fit flush, so I secured them in using superglue. The end result is excellent it has to be said. The magnets are so strong there is no danger of the torso coming off even if you shake the model upside down, yet the top rotates easily. What I'm going to do now is get some more magnets of differing sizes and see about retrofitting some to my tanks.
-

-
What is the unknown warrior?
As part of Remembrance Services the Queen is to lay a wreath at the Grave of the Unknown Warrior at Westminster Abbey. The Dean of Westminster Abbey, the Very Reverend Dr John Hall explains its significance. Link
-
Napoleonic sea fort goes on sale
A Napoleonic sea fort near the entrance of Portsmouth harbour is expected to fetch as much as £750,000 when it is sold at auction next month. This looks amazing ! I wish I had enough money to buy this :) Link
-
WWII tank 'blows up' bungalow
A 1930s bungalow at the front of the Royal Armouries Museum at Fort Nelson has been spectacularly blown up after being shot at by a World War II Sexton self-propelled gun. Link
-
Fighting Talk
This is a very intersting article about some of the history of Aghanistan. Link
-
Posted by Vulture at 06:54 No comments: 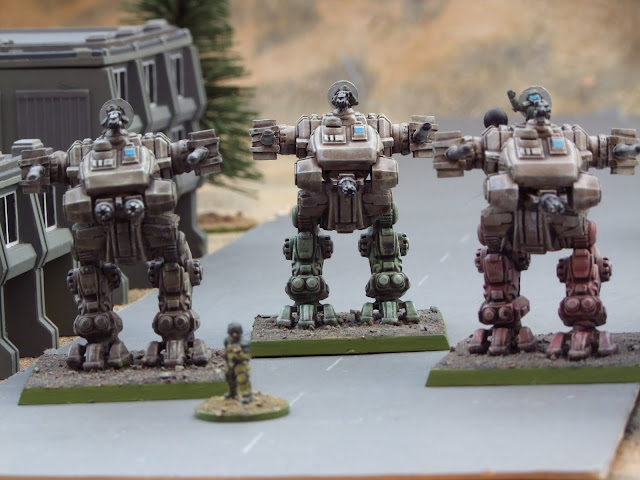 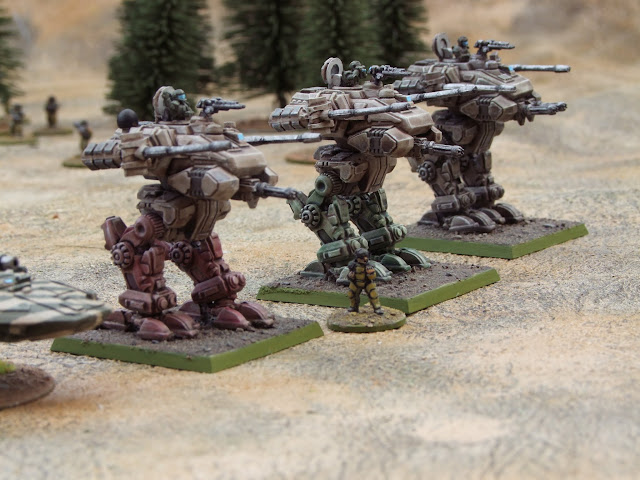 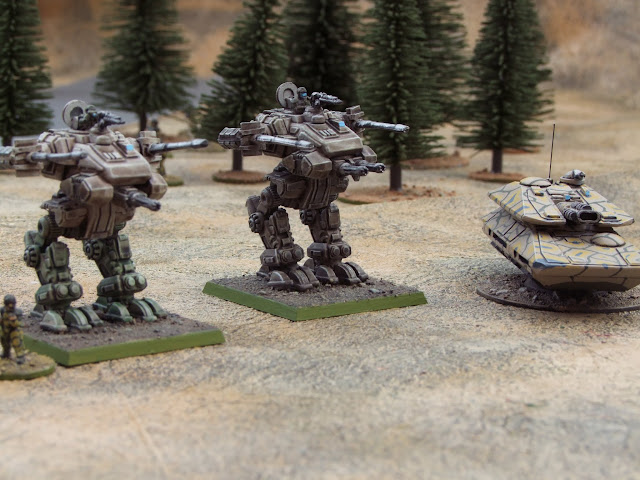 Well I've finished the platoon of Critical Mass Games walkers I got a little while ago. I used a painting technique I spotted on the 'From The Warp' blog, which involves the simple technique of basically applying a Games Workshop Devlan Mud Wash over a light grey base. Overall I'm quite pleased with the end result. Here's a couple of photos I took this afternoon with some GZG infantry and a High Tech Grav tank....
- 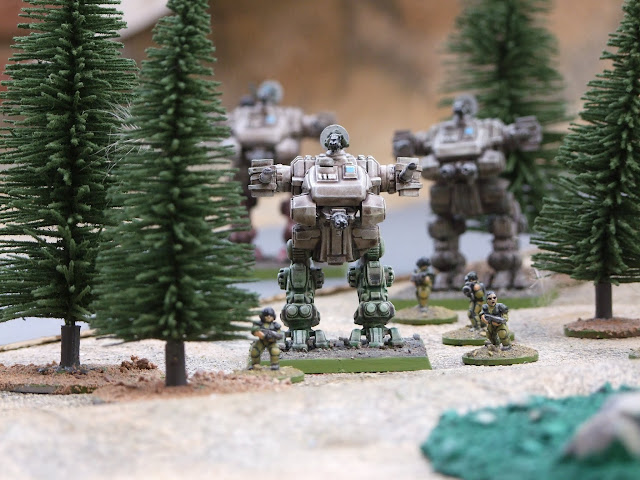 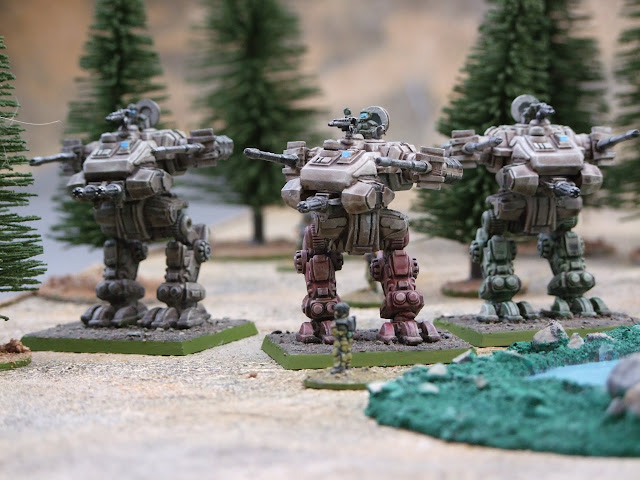 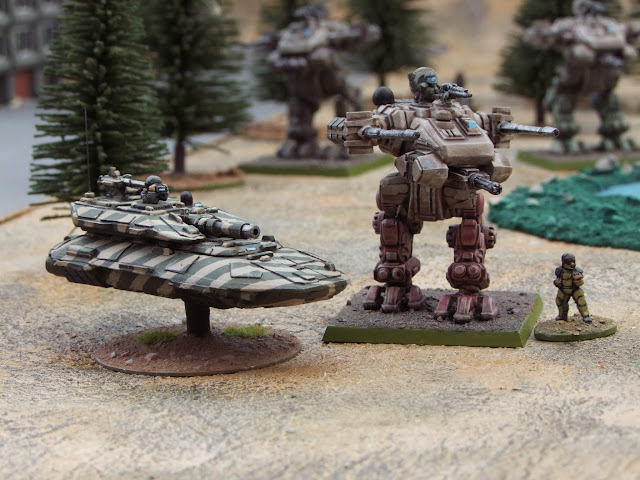 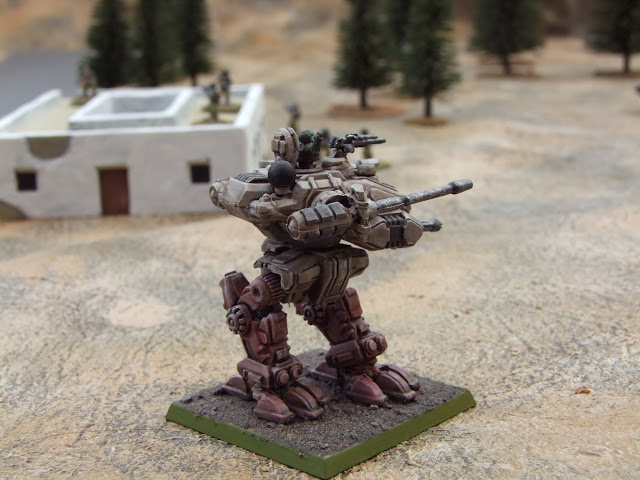 Well its been a funny old day. My son’s been ill with some sort of mild dose of swine flu, so its been a quiet day here in the Vulture household as he wasn’t well enough to do much except watch TV. That being the case I took the opportunity to start the first module in my latest home study course for the CIPS Diploma, and to press on with the Critical Mass Games walkers I mentioned a few days ago. Hope to get some photos taken tomorrow, as they are now 99% finished.
-
This is quite an interesting article about the Bloodhound jet car. Link
-
Posted by Vulture at 23:17 No comments:

Some extraordinarily rare footage of Spitfire pilots at leisure has been discovered.
The colour footage shows how the pilots kept their spirits high as the country fought for its very survival. Link
-
Posted by Vulture at 22:38 2 comments:

Well I've got the first of my three Critical Mass Games 15mm walkers built :) A nice model, the body and legs are resin, the arms chain gun, commander and pintle mg are metal. On this one I've fixed the body position, but on one of the others I hope to use some rare earth magnets I've ordered off E-Bay to allow it to rotate, when they turn up. Hope to have some paint on them in a day or two...
-

-
On seperate topic, its been Bonfire Night here in the UK, when people let fireworks off and light fires to remember the Gunpower Plot of 1605.
-

"Lufcik" from Poland. Restored and very rare!!! Experimental German halftrack, based on the SdKfz 8/DB 10. There is probably only one in existence, and it is fully operational. Totally fabulous ! :)
-

Been busy with the out-laws visiting these last few days, so little time to update the Blog. Fortunately my brother-in-law (Mike) is a keen gamer, and the two of us have been doing quite a bit of computer gaming, both with my son, and also late on a night. Company Heroes ‘Blitzkrieg Mod’ has been the favorite thus far, the two of pitching our skills against the CPU. We’ve also bought Star Wars Battlefront II and Dawn of War II. Both thus far have proven to be a big disappointment. The first because it is so bugged I can’t get it to multi-player over the LAN, and DoW2 is a pig to install, and keeps crashing; furthermore you can only multi-player over the Internet through a Steam account. Not impressed thus far…
-
A platoon of walkers I had ordered from Critical Mass Games came in the post, and I've been gluing the first one together, hope to post a photo as soon as there is some paint on it.
On figure gaming front, my son and I had a ‘play’ battle (no rules as such) on the floor in the yesterday using a mixture of 40k and Space Crusade figures. Here’s a couple of photos…
-