Goodbye To The Lancaster

Over the years I thought I'd read about every vehicle the Germans operated, so I was surprised when I saw mention of the Panzerjäger Borgward B IVc Ausf m RPzB 54.
-

-
There's a bit about it here.  Link.
-
Comment:  I wouldn't have like to be on the receiving end of multiple Panzerschreck strikes from that. It could definitely spoil the paintwork on your T34 !
-
Posted by Vulture at 17:20 4 comments:

Spotted that THQ have started talking about the next game in the Company of Heroes franchise (imaginatively) called Company Of Heroes 2.  As followers of this blog will know I'm huge fan of CoH, so I'm looking forward to how this new game plays.

This what they say:
"In the world’s darkest hour you are a commander of the Soviet Red Army, entrenched in brutal frontline warfare to free Mother Russia from the Nazi invaders. It is 1941 and the beginning of what will become the bloodiest conflict of World War II resulting in over 14 million military casualties. Witness the struggles of the Red Army from near defeat through their incredible triumph over Germany in the most challenging and costly theatre of the war, the Eastern Front. Your military tactics hold the power to tip the very balance of this conflict. Engage in tactical combat that will define you as a military leader and wield the might of the Soviet Empire as you smash your way to Berlin."  Link
-

For Tiger Tank fans this is fantastic site to visit. Myself, I've never seen most of the factory assembly photos. Link. Highly recommended.
-

The weeks photo of the week, is of a Sea Harrier FRS2 that was on static display at the 2004 Fairford Airshow.
- 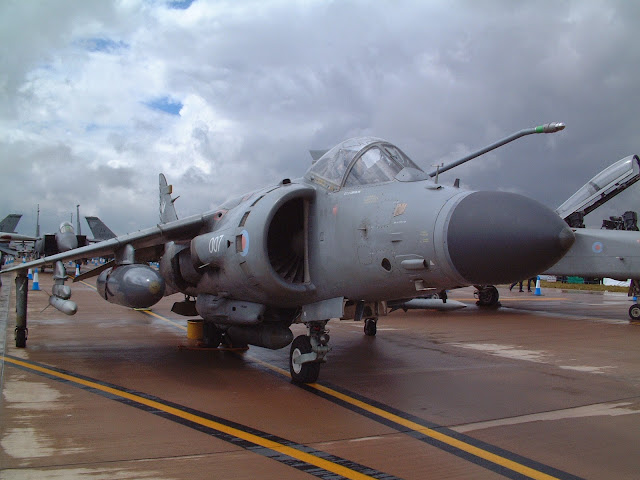 -
I selected this photo for a number of reasons:

1.  I just think the Harrier was such an incredible aircraft, and the FRS2 although a bit underpowered (in hot climates) with its Pegasus Mk106 engine, was well equipped with 4 AMRAAM missiles.  As ever it seems we fail to develop our aircraft sufficiently.  Re-engineing the aircraft with the more powerful Mk107 would have given it a new lease of life.

2.  The variety of aircraft you see at Airshows nowadays (both static and in the air) is but a pale pale shadow of what we used to see.
-
Posted by Vulture at 08:17 No comments:

Labels: Aircraft, Picture Of The Week

A collection of photographs from a young sailor in World War II has sparked mystery about the events leading to the sinking of the formidable German battleship Bismarck. See Sky News: Link
-

Just heard today that Warhammer Historical (part of Games Workshop) has closed down, which presumably means that Warhammer Ancient Battles (WAB) as a rule set is no longer supported :(
-
Posted by Vulture at 14:13 2 comments:

No doubt, this is 'must see' film for all fans of the franchise :)
-

Our MVT area group conducted its first road-run on Sunday 20th May. We had initially planned to stage the run on the 28 Apr, but due to bad weather we postponed, hoping for better in May. Well, it was better in as much as it wasn’t freezing cold and hammering it down, but it was heavily overcast, and pretty cold it has to be said.
The initial plans had 11 vehicles in the run, but then 2 dropped out due to conflicting commitments, and on the day another 2 suffered mechanical problems and so were unable to make it to the start location near Kings Ripton. The ‘magnificent seven’ for the run comprised of 2 x Jeeps, 1 x CCKW 353, 1 x CCKW 352, 2 x Landrover FFRs, and last but not least, a rare Dodge WC63. In addition to the 7 drivers, 4 friends and family crewed along with 1 one hound (Albert). Two support vehicles carried another 5 people including the official trip photographer.

Setting off at 13:00 a series of back roads over a course of 10 miles brought the convoy to its first halt at ‘The George’ pub in Spaldwick.
- 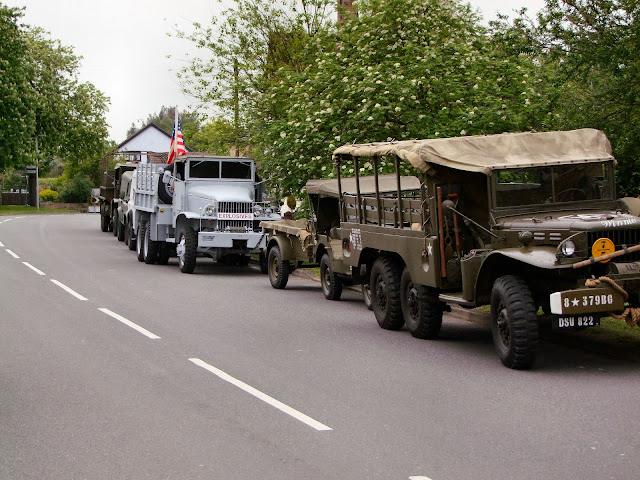 -
A 40 minute refreshment break allowed those souls in the more exposed vehicles to regain a semblance of blood supply to their extremities.
- 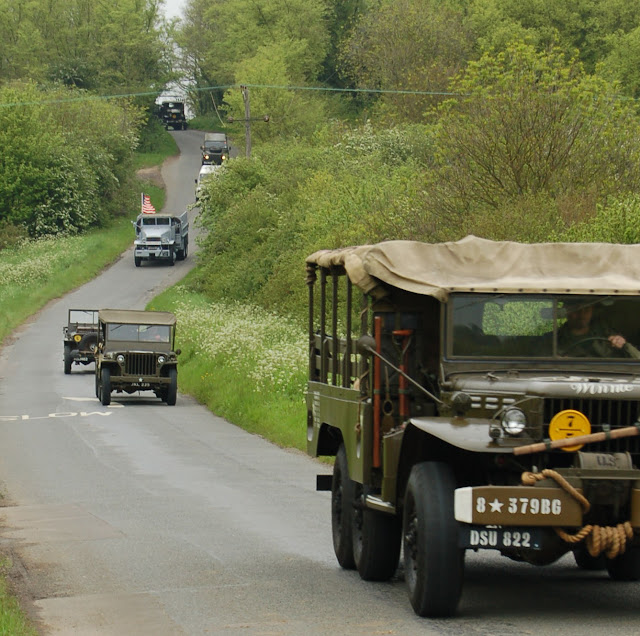 -
The second and last part of the journey over a further 10 miles involved some challenging narrow and twisty lanes (especially for the larger vehicles) for about 8 miles before we broke out into more open terrain for the final run into RAF Little Staughton, arriving around 15:15. Following an undercover barbecue tea, people headed off home around 16:30.
-
A good day overall, and we will be definitely doing another, perhaps in September.
-
Posted by Vulture at 11:33 2 comments:

The submarine sits silently on the seabed. Inside, the bodies of 58 sailors still rest, 80 years after the vessel sank in the English Channel off Dorset. Now some of their family members hope to sail out to the wreck to mark the anniversary of the tragedy. HMS M2 was the world's first underwater aircraft carrier, but it went down with the loss of all 60 hands - including two airmen - in 1932. See the BBC web site for more on this story. Link
-

I've decided to introduce a new feature to my blog, a 'Picture Of The Week'. This first one is of a Swedish S Tank I photographed at the UK Defence Acedemy at Shriveham. The S-Tank is one of my all-time favourite vehicles. Back in the 1980s I used to do lots of Modern Micro-Tank (1/300th) gaming. I had several armies I used to use, but favourite was my Swedish army (which I still have incidentally). I just think this is such a brilliant vehicle.
- 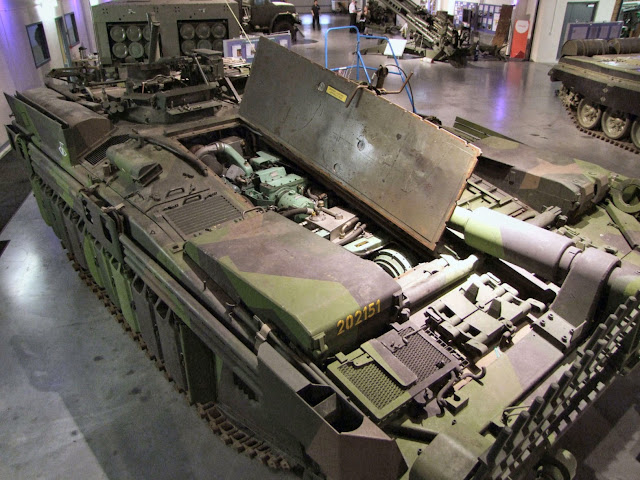 -
Looking round the vehicle it is larger, certainly wider than I had expected. The thing that surprised me however was how thin the armour was on the hull glacis plate (approximately 27mm) and this is because, as you can see they are in fact the engine access panels.
-
Posted by Vulture at 08:50 1 comment:

Check out these new places to rent that were originally constructed as Air Raid Shelters !  Link

I took time out from revising for a (Purchasing) exam on Saturday morning, and went down to Bassingbourn Airfield to attend a local 1940s show called 'Somewhere in England'. The aim of the show this year is to raise money to restore the WW2 Control Tower.
-

-
Lots of lots of space at the show, with if I'm honest, not a huge amount there. The entrance price of £10 per adult seemed on the expensive side given what was there, £5 would have been more reasonable.  There were perhaps 20 vehicles, a few displays, 1 hot dog stall, about 16 trade stands, plus a band. The layout seemed poor to me, as the band were out on a limb somewhat, furthermore I'm reliably informed that the Tower and Museum were shut due to lack of staff, which seems nothing short of astonishing as you would have thought that these were the days when you really wanted it open !  Given the rubbish weather here in the UK recently (wettest April since records began in 1910), they were very fortunate as both Sat and Sun were clear and sunny.  I've decided to get myself some period gear to wear from time-to-time when I take my own CCKW truck to shows and I managed pick up a jacket for a quite a reasonable price.
Stand out vehicle for me was CCKW 353 with a .50cal mg and extra ammo boxes round the ring, although a black limo looked amazing, and the photo I took doesn't do it justice.  It will pop up in the slideshow below.
-

A World War II RAF American-made P40 Kittyhawk single-engine fighter, which crash-landed in a remote part of the Egyptian desert in 1942, has been discovered almost intact. Link
-

The latest version of these free Sci-Fi rules 'Fast And Dirty' is out, with all sorts of extra bits added.  Well worth checking out, the author Ivan Sorensen has done a great job.  Link
-
Posted by Vulture at 08:02 No comments:

The Royal Flying Corps came into being 100 years ago and played a key role in World War I - but who were its heroic pilots and why was the corps so special? Link to BBC
-

Check out the pictures of this 28mm Italian town on this TMP thread.  Simply awesome !  Link
-

This is quite interesting.
-

The truck engine cranks over really slowly when cold.  I need to get to the bottom of why this is...
-

Pic Of The Day

Guys
I came across a bunch of podcasts on the Bovington Tank Museum web site. Done by tank veterans (one of whom is the well known wargamer Donald Featherstone), some of them are fascinating.  Highly recommended.  Link
Posted by Vulture at 22:02 No comments: