Had my first taste of the SAGA game at the club on Thursday.  SAGA for those who haven't heard about it is a skirmish figure game set in the Darkages - produced by Gripping Beast.
Up to recent I'd viewed the odd game from afar and hadn't really been inspired to try it.  However a game at the club a few weeks back looked such good fun I felt motivated to ask John Savage to run a game another game so that I could join in.  I dug out some very old 25mm Byzantines (mostly Irregular Miniatures) that I bought over 25 years ago, that hadn't seen the light of day for a decade I reckon (last used in a WAB game) to make up a 4 point army.  After an enjoyable I must confess to being quite impressed.  The rules seem pretty straightforward and even in my first game I was able get a hang of most of the basics.

I can see this is a system we'll be using for some time to come.  I like the way the armies aren't that big (its a skirmish game after all), so you don't have to make a massive investment, and can actually afford to have a selection if you want to. Found a company called 'The Dice Bag Lady' that do a 6 point plastic Viking army for only £23 !

I'm definitely going to buy the rule book this weekend, and am thinking about another army to get to use as well as my old Byzantine one.
Here's a listing of the various different factions I found on the web, on the Gosford Gamers web site  (Link).
-
As normal here's a few pics (of one end of the table) of what was a slightly chaotic 6 sided every man for himself game :) 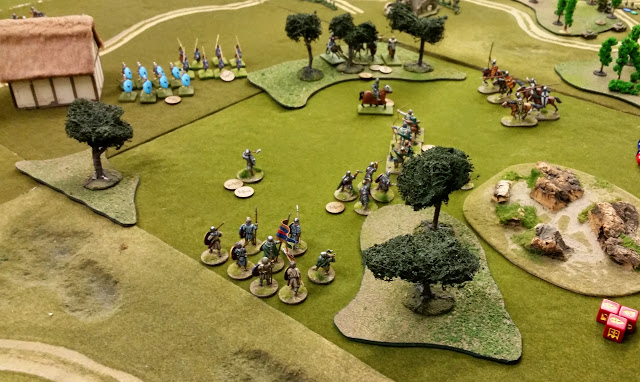 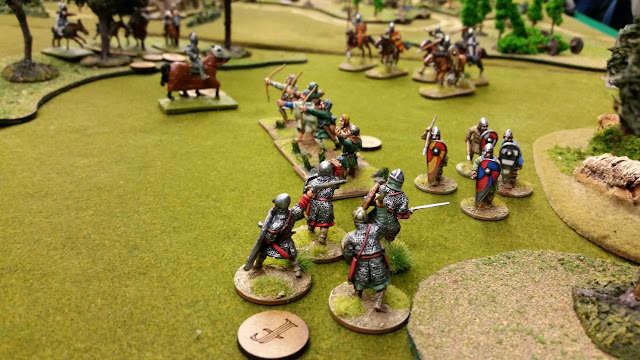 CCKW truck in for a service

My CCKW due to its age is considered a historic vehicle by the DVLA and as such is exempt from requiring an annual MOT.  Owners self-authorise the road-worthiness of their vehicles.  From my point of view whilst it's a relief not to have to face the trauma of a MOT on such old vehicle I do want to be safe on the road.  To that end 2 years ago I put the truck in for a safety inspection (Link) and it's now time for another.  I'm using a specialist company called MV Depot who are based here in Yorkshire.  Adam Wright the owner is very experienced with CCKWs and having taken all the wheels off and inspected it all over, I'm following his recommendation and having the all the brake cylinders and hub seals renewed.  Here's a couple of pics from yesterday and today. 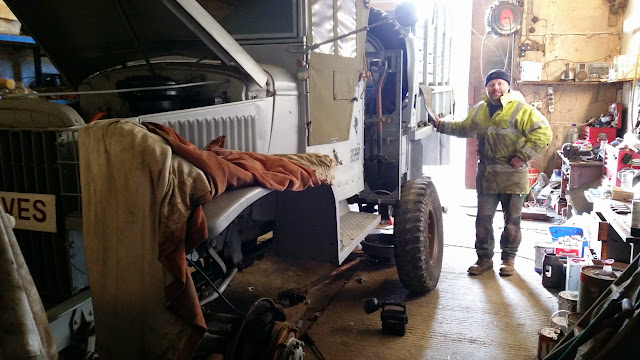 Truck up on axle stands, all wheels off.
- 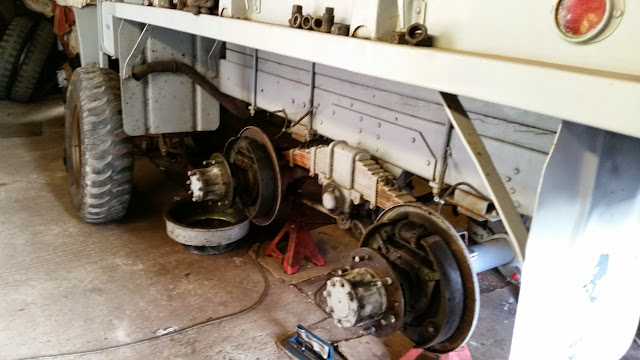 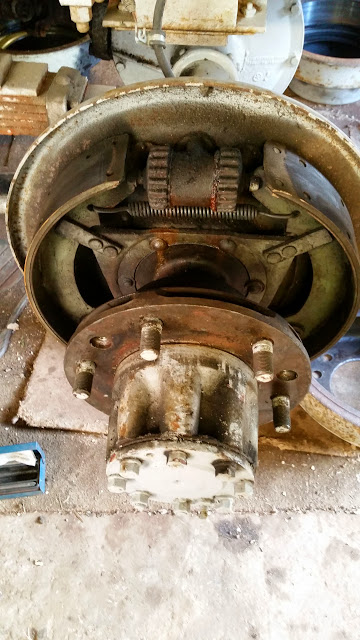 Close up of the brake mechanism.  You can see where there has been a slight weep of brake fluid from the cylinder.
- 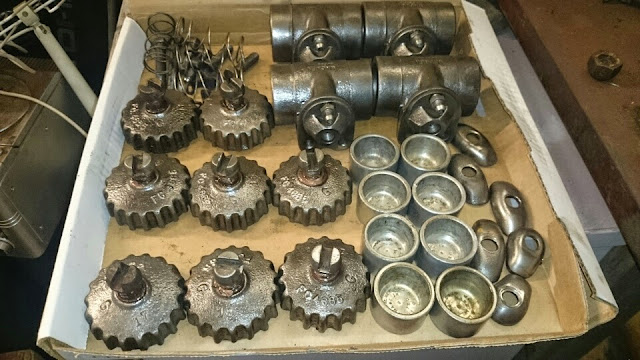 Rear brake cylinders all removed and cleaned, waiting on new seals.
-
Posted by Vulture at 19:30 2 comments:


-
Comment:  I have the original, a classic space game in every way.  This re-mastered version is a  recommended purchase for those who haven't tried it.
-

Last night at the club we had a another FUBAR 40K game.  Further tweaks to the rules were experimented with, namely:
a)  Adding an activation system as per the Bolt Action rules, and
b)  Adding proper penetration charts for armoured vehicles, like with the FUBAR 15mm expanded rules our club uses.
c)   Use of a slave Psyker.
The penetration charts worked fine but the Bolt Action system of pulling dice out, to then prompt an activation role was deemed a failure by all involved.  In future where multiple players per side are involved (as they were in this instance) we will use a system where at the start of each turn both sides roll to see who goes first, highest on a D6 winning.  Every player on that side then gets an opportunity to try and activate a unit.  It then switches to the other team, who then get to try and activate a unit each etc etc.  The Pysker rules were fine as well, and detailed at the end of this posting.

The scenario last night saw the Emperors forces fighting on the fortress-world Jago against the dark forces of Chaos.  It had become know that a lost relic associated with Saint Sabbat had been found in a small village.  A mixed mech platoon of the 53rd Cadogus Regt (Imperial Guard) was despatched with a small Pysker unit from the Sanction Division to secure the artefact before it was desecrated by the unbelievers.  The enemy forces also despatched forces to the village, in the shape of an Ork Platoon and two Chaos Space Marine squads.

Battle was joined when the 53rd were disturbed searching the village.  One section of Guard held up the Orks north of the bridge, but were ultimately wiped out to a man.  The Chaos Space Marine advance from the West was disrupted when a Pysker took control of a squad member with a missile launcher.  This and a Lee-Man Russ tank saw that squad being eliminated, but the mental effort was too much for the Pysker who suffered a melt-down.  A 2nd Chaos squad made it into the village but was unable to stop the Guard locating the artefact and escaping off-board before they too were wiped out.  An entertaining little game overall
-
Here's some pics. 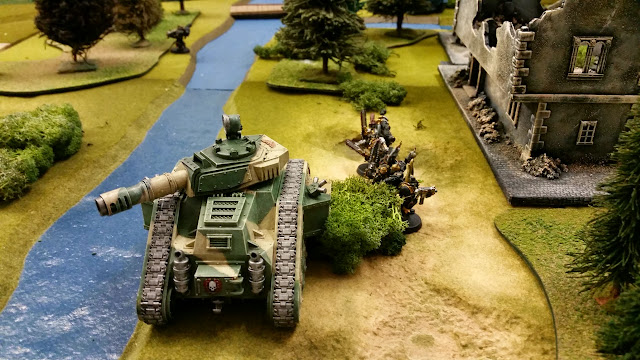 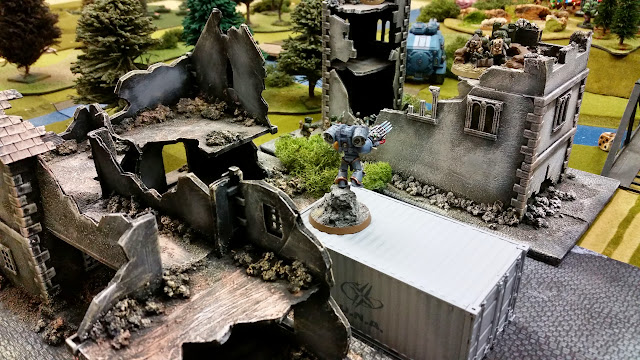 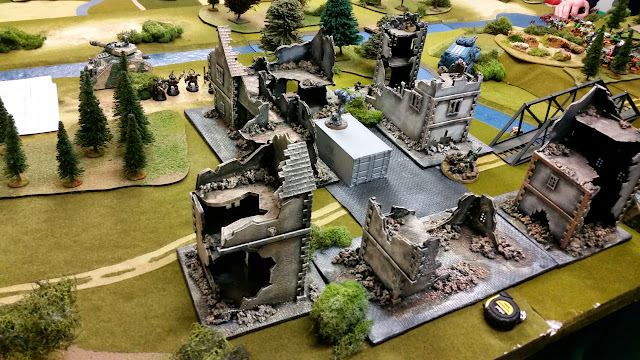 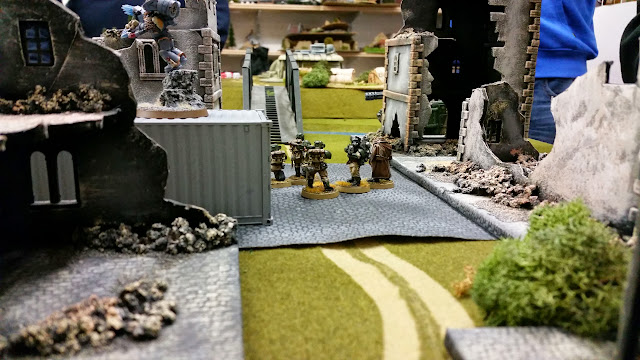 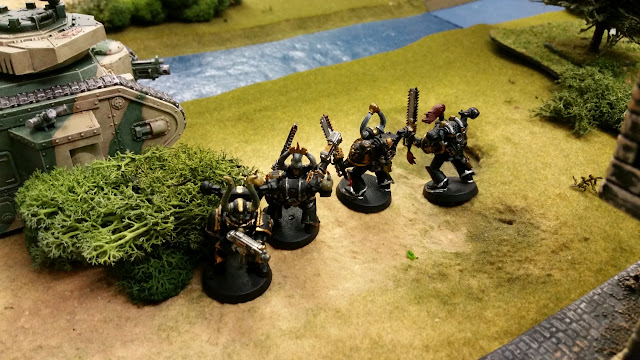 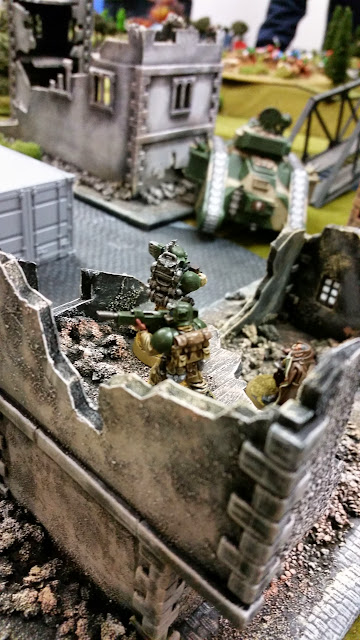 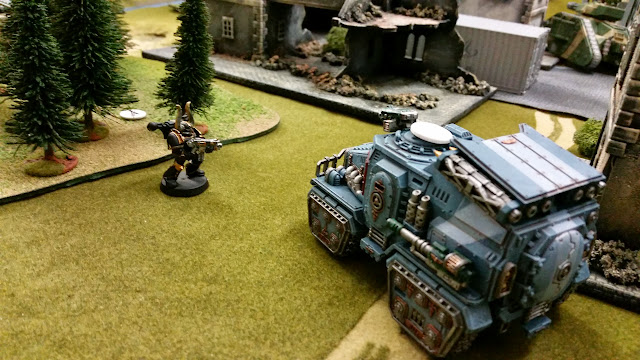 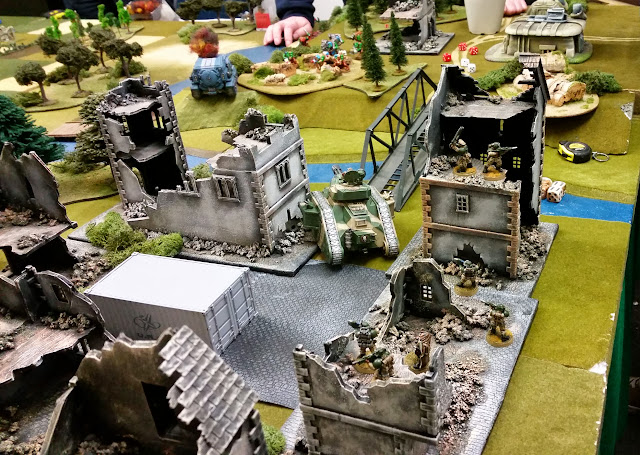 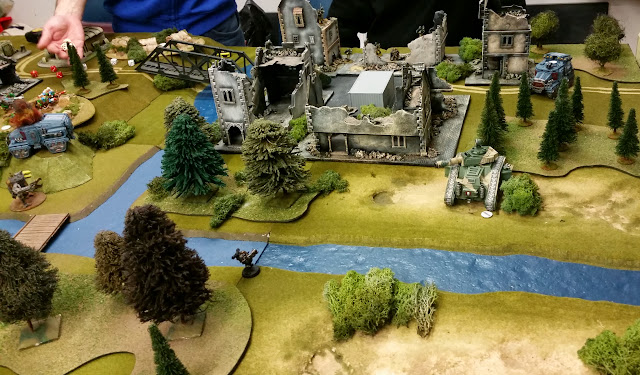 -
Slave Psyker Rules for FUBAR 40K (Expanded)
Slave Pysker is chained in a cage and has to be attended by at least 2 member of the Sanction Division who will be armed with Laser Pistols and Flak body Armour.
1.  Must be activated in the normal way.  Initiative roll 4+.
2.  Range of use: 36:
3.  Can attempt mind control of any individual (not another Pysker).  Is successful on a roll of 2+ on a D6.
3.  The following turn(s), provided the Pysker activates the individual under control can be given any normal action, including a new one of Suicide.
4.  Once under mind control, if the Pysker does not successfully activate, the individual does nothing.
5.  Each turn the Psyker uses his mind control there is a chance he will go mad.  On a roll of 6+ each turn this happens.
6.  If the Pysker 'goes mad' the following happens:
a)  The individual under his control reverts immediately to the original players control.
b)  His attendants are automatically killed by a Psychic blast.
c)  Any other troops within 12" must make a D6 roll, and on a 5+ go mad and go over the enemy's control where they must try and fire on their old team mates.  If no targets can be seen, they commit suicide.
Posted by Vulture at 10:40 No comments:

How Bad A Guy Was Richard III ?

The funeral for Shakespeare's greatest villain is fast approaching.  But did he really kill the princes in the Tower ?  Late Tudor England was a lethal environment for the politically unwary, with errors of judgement frequently resulting in a one-way trip to Tyburn gallows.
There is an interesting article here on the Telegraph web site that is worth a read: Link
- 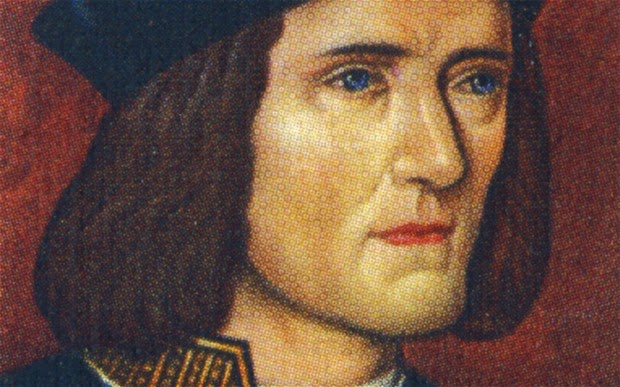 A friend of mine Andy Baxter sent me this excellent picture of an M1 that he came across.  It makes for a good desktop background :) 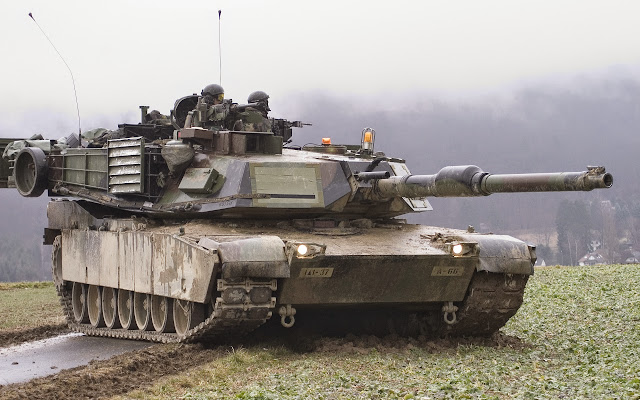 -
Comment:  A U.S. Army Abrams M1A1 tank takes a defensive position at a staging area during Ready Crucible in Germany, on Feb. 11, 2005.  Over 50 tanks from the 1st Armour Division, Humvees, and support vehicles drove through more than 60 kilometres of German roadway and farmlands making Ready Crucible the largest movement of American armour in Germany since the 1980's.  DoD photo by Richard Bumgardner, U.S. Army.  (Released)
-
-
Posted by Vulture at 16:28 No comments:

The Most Epic Flight Safety Video Ever Made !

Came across this web site called Battlefield Game Designs.  Link.  They are doing the following three rules sets that all look quite interesting:

Just seen an advertisement for a new gaming magazine.  This is how it describes itself:

"Yaah! magazine is a new kind of periodical. An independent digest that covers all types of war and strategy games, regardless of their publisher."   Link
- 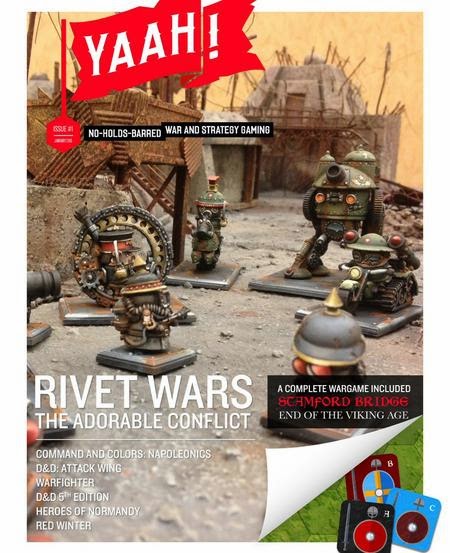 3. A guy walks into the psychiatrist wearing only Clingfilm for shorts. The shrink says, 'Well, I can clearly see you're nuts.'

4. I went to buy some camouflage trousers the other day but I couldn't find any.

5. I went to the butchers the other day and I bet him 50 quid that he couldn't reach the meat off the top shelf. He said, 'No, the steaks are too high.'

6. My friend drowned in a bowl of muesli. A strong currant pulled him in.

7. A man came round in hospital after a serious accident. He shouted, 'Doctor, doctor, I can't feel my legs!'
The doctor replied, 'I know you can't, I've cut your arms off'.

8. I went to a seafood disco last week and pulled a muscle.

9. Two Eskimos sitting in a kayak were chilly.. They lit a fire in the craft, it sank, proving once and for all that you can't have your kayak and heat it.

10. Our ice cream man was found lying on the floor of his van covered with hundreds and thousands. Police say that he topped himself.

11. Man goes to the doctor, with a strawberry growing out of his head.
Doc says 'I'll give you some cream to put on it.'

13. A man takes his Rottweiler to the vet. 'My dog is cross-eyed, is there anything you can do for him?'
'Well,' said the vet, 'let's have a look at him'
So he picks the dog up and examines his eyes, then he checks his teeth. Finally, he says, 'I'm going to have to put him down.'
'What? Because he's cross-eyed?'
'No, because he's really heavy'

18. Apparently, 1 in 5 people in the world are Chinese. There are 5 people in my family, so it must be one of them. It's either my mum or my Dad, or my older brother Colin, or my younger brother Ho-Cha-Chu. But I think it's Colin.

19. Two fat blokes in a pub, one says to the other 'Your round.' The other one says 'So are you, you fat bastard!'

20. Police arrested two kids yesterday, one was drinking battery acid, and the other was eating fireworks. They charged one and let the other one off.

21. 'You know, somebody actually complimented me on my driving today. They left a little note on the windscreen. It said, 'Parking Fine.' So that was nice.'

22. A man walked into the doctors, he said, 'I've hurt my arm in several places'
The doctor said, 'Well don't go there anymore'

23..  Ireland 's worst air disaster occurred early this morning when a small two-seater Cessna plane crashed into a cemetery. Irish search and rescue workers have recovered 2826 bodies so far and expect that number to climb as digging continues into the night.

Just came across this great piece of footage of the Tiger II arriving at the 2015 Retromobile Paris Show.
-
-
Posted by Vulture at 19:51 No comments:

On Sunday (1st Feb) I went along to Vapnartak.  This is the annual wargames convention staged here in York by the York Wargames Club at the York racecourse. I've been along the last two years and found it to be a great show.  This year was somewhat different however as I had volunteered to put on an Aliens Participation game.  Managed to get on-site and get the 6x4ft table set up for about 09:30. This gave me an hour to look round the show before I was planning to run my first game.
-
Posted by Vulture at 23:21 No comments: