Gaming wise the present of note this year was Zombicide.  Seen quite a few pictures of the game in action and several people I know highly recommend it, so can't wait to have my first full game :)
- 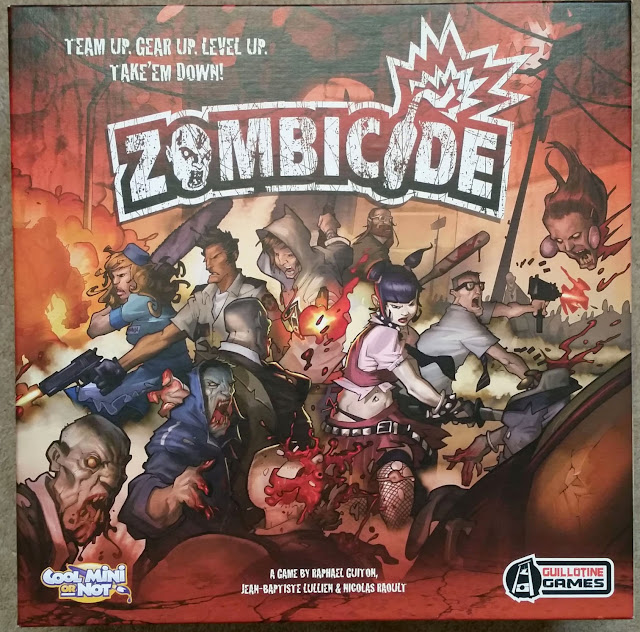 Not connected with wargaming or military stuff, but still worth a watch anyway :)
-

Tower Bridge, The Dubstep Movement from Chadchud Timelapse on Vimeo.
-
Posted by Vulture at 20:15 No comments:

A slightly belated Merry X-Mas to all the readers of my occasional ramblings. I hope you had an enjoyable and stress-free X-Mas.
Posted by Vulture at 09:18 No comments:

Went along to the Recon Wargames Show today.  This is a small local show put on by the Wakefield and District Wargamers Club in the Pudsey Civic Centre.  It it must be over 15 years ago since I last went so I couldn't clearly remember anything about the venue or the show.  Found myself pleasantly surprised all in all.  There was a good mix of traders and selection of games to watch/participate, plus  the food and drink was very reasonably priced.  My only criticism is reserved for the Bring and Buy which was rubbish.  The space available to show the bits for sale was inadequate as was the frontage to view the items, plus there was insufficient depth because it shared the room with several traders.
Found myself tempted by all sorts of goodies, but in the end settled on a purchase of the 'Firefly' board game, a jar of green Basetex and a Flames of War blister pack for £5 containing two CCKWs. Looking forward to getting to grips with the game, as I've read lots of good things about it. Link
-

Festive Lights For The The Truck

Mrs Vulture has been and bought some festive lights for the front of the CCKW truck. Seemed like a good excuse to go for a drive into York last night, coinciding as it did with my birthday.  :)
- 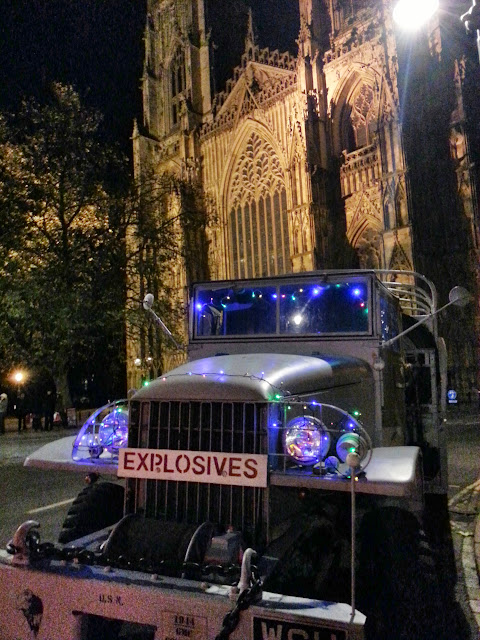 -
Here we are parked up in front of York Minster.
- 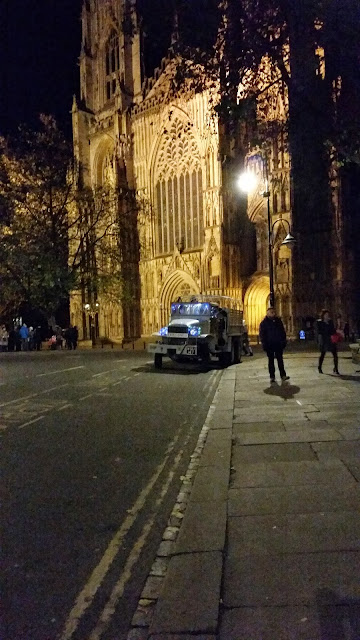 
-
On the 20th October 2014 Murray Walker OBE, a former Sherman tank Commander with the Scots Greys during World War II, well-known as a motor racing commentator, opened The Tank Museum’s latest exhibition, ‘Fury’.
-
Posted by Vulture at 20:01 No comments: 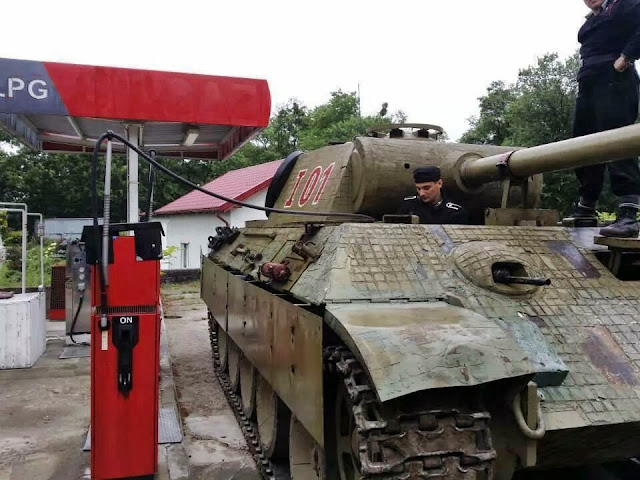 -
Comment:
Not something you often see...  A WW2 German Panther tank taking on some fuel in a petrol station.
-
Posted by Vulture at 23:12 No comments:

At the moment I'm re-reading one of my favourite sci-fi series of all time, the Gaunts Ghosts omnibus edition by Dan Abnett.  Of course reading about the Warhammer 40K universe prompts an itch to dig out my 40K figures and have a game.  The problem though is the Gameswork Shop 40k rule set which is not at all liked by myself or my gaming group at the Harrogate Wargames Club.  As a comprise I suggested we use the expanded version of the FUBAR rules I've blogged about before and a 40K supplement I found on the web.  Accordingly we had a game a couple of weeks back with myself acting as the Umpire.

Playing on our usual 8' x 8' table an Imperial force comprising 2 x squads of 5 Space Marines and a squad of Imperial Guard (10 strong) entered in one corner and the forces of Chaos in the shape of 2 Ork squads (12 each) and 2 squads of Grots Snotlings (10 each) at the opposite.  Both sides moved forward and got set into each other and it quickly became apparent that the Space Marines had a significant qualitative advantage in-spite of their small numbers.  Both sides fed reinforcements in in the form of heavier units including a 3 man unit of Imperial Terminators which teleported down but using a random dice not into a great spot! LOL.  Undaunted however they climbed onto a building and opened up with their Heavy Bolters.  This was an interesting moment for they almost wasted an entire Orc squad in one round of firing.  This generated lots of banter round the table and a last ditch effort by the underpowered Orc team to try and kill some more Marines.  At this point we ran out of time, but notwithstanding this the game was judged to have been a great success.  Easy to pick up rules that gave a reasonable result without too much stress made a for a good evenings wargaming entertainment :)
-


Here's a selection of photos from the game. 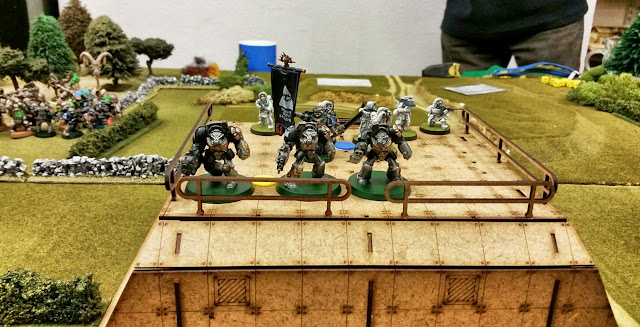 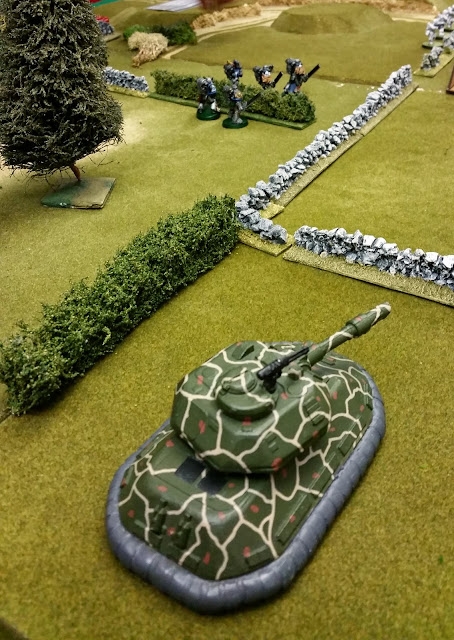 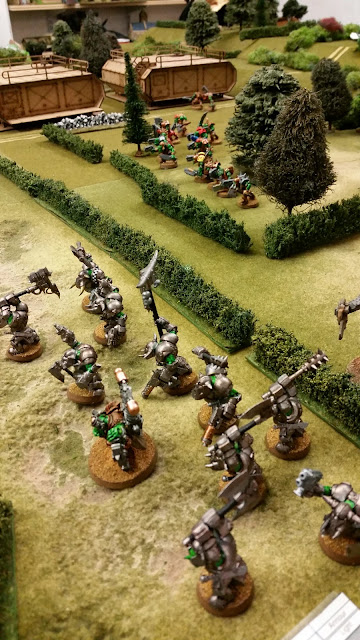 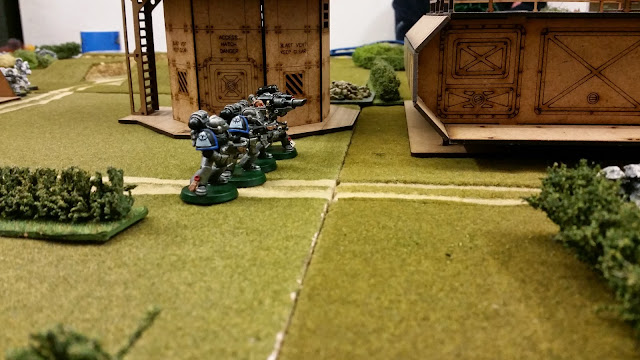 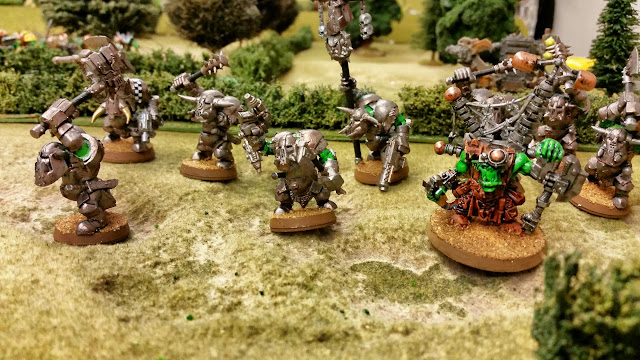