This trailer for a new 40k Space Marine game from those smart chaps at Relic has just been released. V nice.
-

Not much happening on the gaming front since I last posted due to exams and being away visiting the outlaws. Thought I'd post a trailer for what is IMHO the best submarine movie ever made.
-

The Hunt For Gollum - Fan Film

An unofficial and free 39 minute Lord of the Rings fan film, made for less than $5,000 by Independent Online Cinema. Based on parts of The Lord of the Rings, it tells of when Aragorn tracked down Gollum between The Hobbit & The Fellowship of the Ring. Definately worth watching ! :)
-

Took the first of my two CIPS exams today. Some of the damn questions were so ambiguous I couldn't work out what the hell they wanted ! (deep sigh). No time to post anything about gaming tonight, but here is a classic sketch from The Two Ronnies to make you smile.
-

This is a brilliant trailer for one of my favouriste films. There is lots of trivia about the film on the Internet Movie Database (IMDB), which is just a fabulous resource for film buffs everywhere. Seeing this film always gives me the urge to dig out my 25mm Romans and give them an outing using the Warhammer Ancient Battle (WAB) rules.
-

-
Two of the best quotes:
'My name is Maximus Decimus Meridius, commander of the Armies of the North, General of the Felix Legions, loyal servant to the true emperor, Marcus Aurelius. Father to a murdered son, husband to a murdered wife. And I will have my vengeance, in this life or the next.'
-
'What we do in life, echoes in eternity...'
-
Posted by Vulture at 09:04 No comments:

Firing up a Rolls Royce Merlin V12 (or is it a Meteor ?

My brother sent me a link to this engine firing up. Turn the volume up to fully appreciate it ! :)
-

Study revision for my exams next week is well underway at the moment. Currently reading all about techniques for controlling inventory (yawn), I'm absolutely bored out of my mind. Thought I'd post a photo of the repainted Star Wars Republic Gunship I have in my collection (figures are by GZG). My son is trying to encouraging me to jazz it up with some nose-art. I have some intersting ideas which I might try out in a couple of weeks.
-

Quite simple one of the best trailers ever done for a game IMHO. Certainly worth posting :)
- 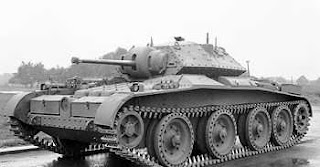 This without doubt must rate as one of the least successful tanks of WW2. Check out this link about the British Covenantor tank which makes entertaining reading:
-
Here's a quote: "Deliveries to units began straight away, the first vehicles sent direct to the army were received at Bovington in late 1940, unfortunately without instructions as to starting, etc. Trials here revealed some annoying defects. Rushed design showed - ammunition bins were fouled by various projections, it took four hours to change batteries and one hour to top them up, fitting the radio was difficult, odd items were inaccessible - mostly fairly minor but unlikely to make the vehicle popular, and they would have been easily corrected had production only started after troop trials"
-
Posted by Vulture at 10:40 3 comments:

Found out from a posting on the Space Hulk Yahoo group that a team of Space Hulk enthusiasts called 'Teardown' have been developing a PC version. Check out their web site for more info. In the meantime here is a small movie of the game. This looks excellent, and could be brilliant as a PBMEM game. Fingers crossed they find they can release it when they eventually finish the programing.
-

Interesting Site About The Sdfz251 Half-Track

This rather an interesting site about the WW2 German half-track, the Sdfz251. http://www.sdkfz251.com/index.html.
-
Here's a short clip of one running.
-

Wargaming is sadly going to have to take a back-seat here at the 'Vulture's Roost' for the next 12 days as I focus on revising for two exams I have coming up. Due to career uncertainties I decided it might be an idea to get some more qualifications, therefore I'm currently doing a certificate in Purchasing & Supply. I intend to keep the blog going during this period with a few good clips from U-Tube. Here's a good tribute to the classic film Top Gun.
-

A fantastic short movie from Pixar with two of the characters from Monsters Inc.
-

I've been working on some terrain these last couple of days, in between family stuff and playing Company Of Heroes with my son (a totally brilliant computer game). Here's a couple of sci-fi /modern 15mm buildings that I made by using some surplus plastic boxes (that came with 1/72nd scale dragon armour vehicles I recently bought), spraying them gray, and then sticking some paper terrain pictures on the sides and top. I sourced the pictures from the Beamstrike Forum (thanks Neil).
- 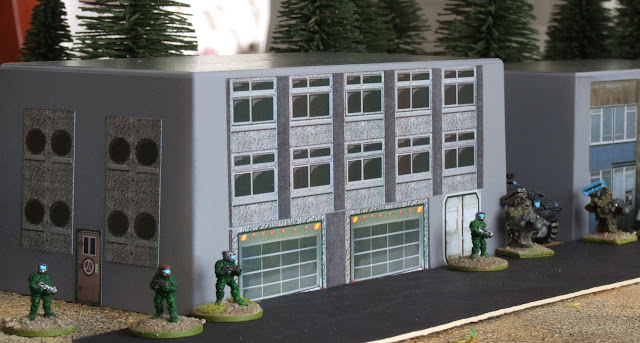 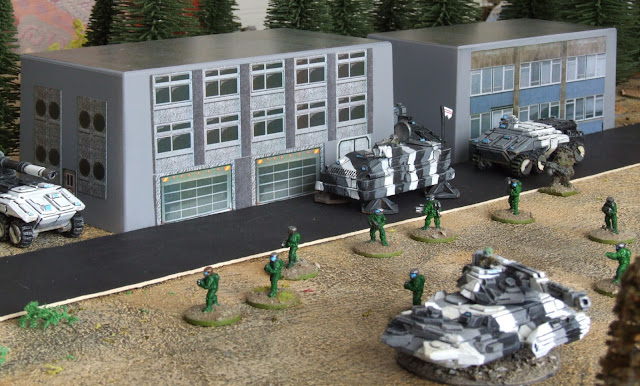 Stumbled across this on U-Tube.
-
A rare chance to see what it's like inside a running Tiger 1. The clip shows a short test run of Tiger 131 at the Tank Museum in Bovington, England.
-