-
Comment:  None  of your newfangled electric starts here !
-
Posted by Vulture at 22:17 No comments:

There is great clip of a restored Panther on U-Tube that is worth a look.  Link
-
Posted by Vulture at 10:21 No comments: 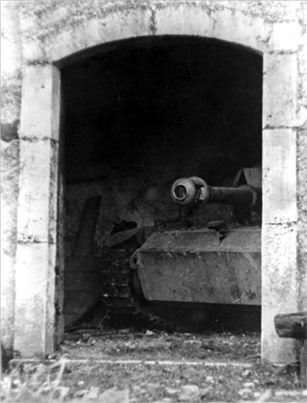 A mother passing by her son's bedroom was astonished to see the bed was nicely made, and everything was picked up.
Then, she saw an envelope, propped up prominently on the pillow. It was addressed, 'Mum'.  With the worst premonition, she opened the envelope and read the letter, with trembling hands…

'Dear, Mum.
It is with great regret and sorrow that I'm writing you. I had to elope with my new girlfriend, because I wanted to avoid a scene with Dad and you. I've been finding real passion with Stacy, and she is so nice, but I knew you would not approve of her, because of all her piercings, tattoos, her tight Motorcycle clothes, and because she is so much older than I am. But it's not only the passion, Mum. She's pregnant. Stacy said that we will be very happy. She owns a trailer in the woods, and has a stack of firewood for the whole winter.  We share a dream of having many more children. Stacy has opened my eyes to the fact that marijuana doesn't really hurt anyone. We'll be growing it for ourselves, and trading it with the other people in the commune, for all the cocaine and ecstasy we want. In the meantime, we'll pray that science will find a cure for AIDS, so Stacy can get better.  She sure deserves it!! Don't worry Mum, I'm 15, and I know how to take care of myself. Someday, I'm sure we'll be back to visit, so you can get to know your many grandchildren.

PS: Mum, none of the above is true. I'm over at Jason's house. I just wanted to remind you that there are worse things in life than the school report that's on my desk.

Call me when it is safe to come home…!!

Picture Of The Week - No 24 - Typhoons At Falaise 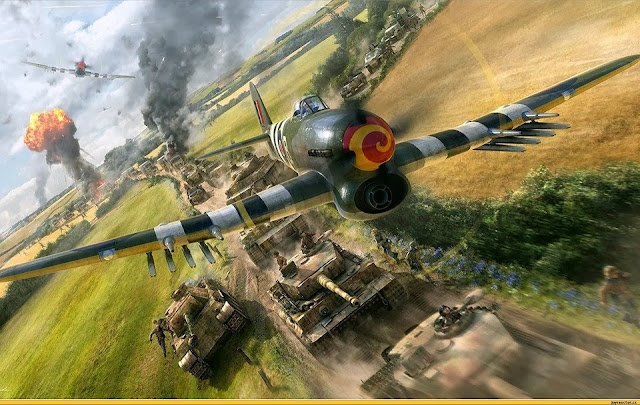 This looks incredibly cool :)   Link to the full article.
-

Enthused with Flames of War my gaming crowd started on a FoW games two weeks back   4 players per side, I took my cleaning living god fearing Americans along with Chris and Theo, and our stiff upper lip Brit ally John against the unwashed Nazi scum in the shape of Andy, Steve, Simon and Mick.  The random scenario we rolled up was Breakthrough.  As my Yank unit always attacks, unsurprisingly  the Allies were the attacker.  Good placing by the Germans prevented an Allied breakout from the town with Brit armour and a determined Infantry assault by Theo was stopped dead by a combination of Infantry and AA guns used in the ground role.  Turn 5 saw a breakout by American & Brit armour to the north however, wiping out a small Tiger and a Panther platoon.  My two Veteran TD platoons came on as reinforcements and after seizing one of the objectives rapidly has to retreat in the face of lots of German Infantry loaded with Panzerfausts.
Here's a selection of photos taken with my Samsumg IIIS phone.
- 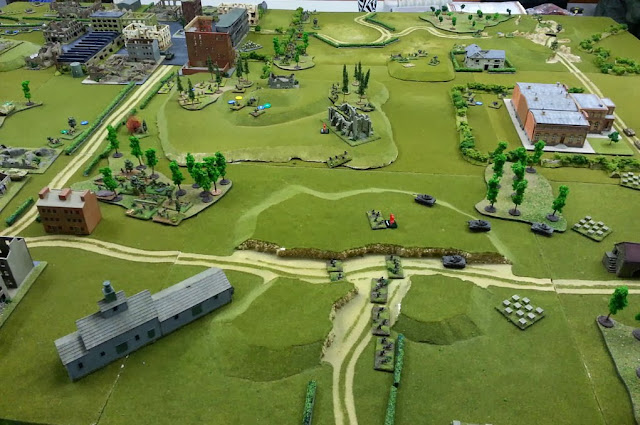 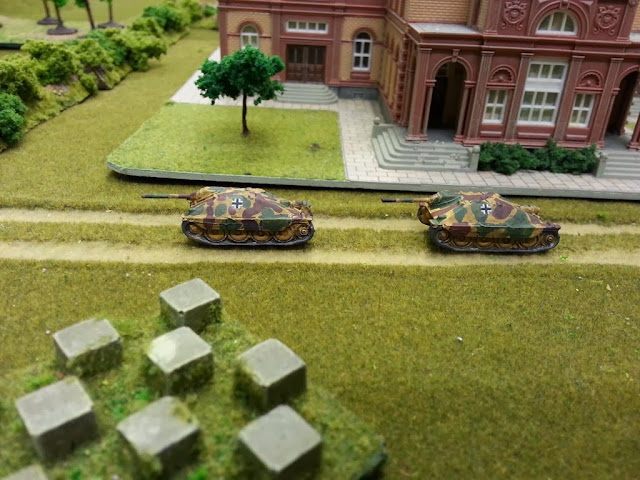 Hetzer reinforcements on their way to hassle the US Tank Destroyers.
- 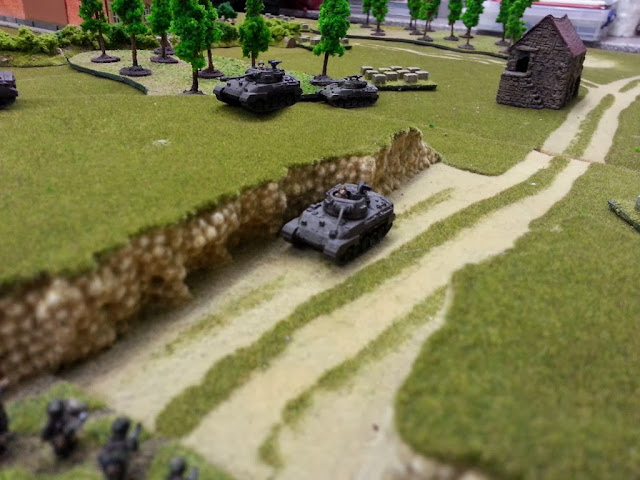 My first M18 TD unit contesting the objective.  Latterly forced back, a lucky German 120mm barrage took two of them out in one hit.
- 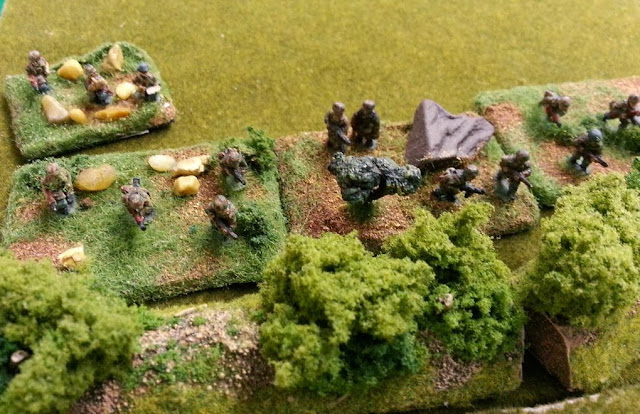 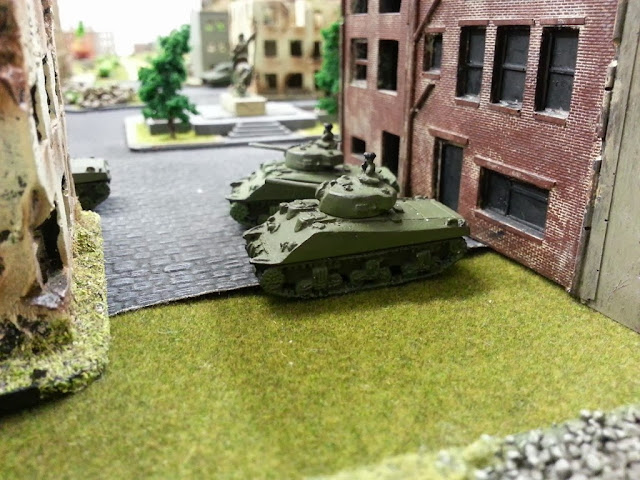 Johns armour in the town waiting to break out.
- 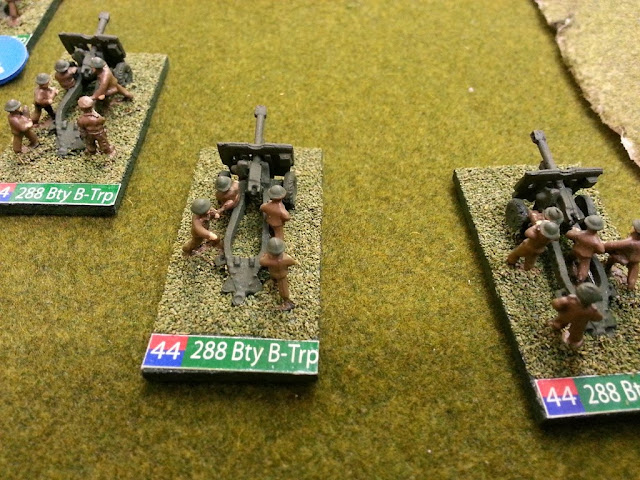 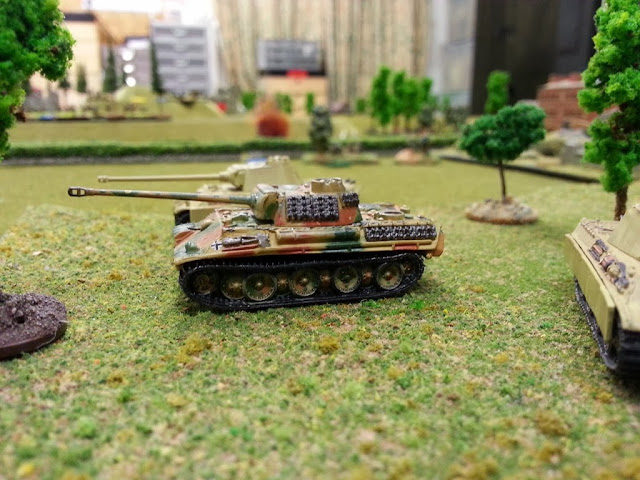 Andy Baxters Panthers waiting it out in a wooded area.  All were subsequently KO'd by a massed Sherman attack.
- 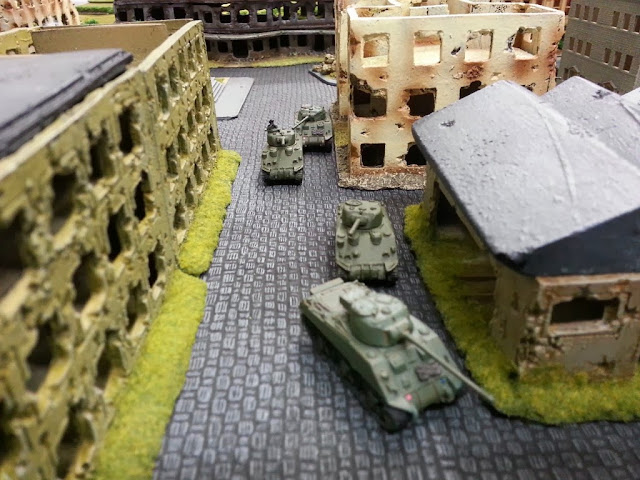 Johns Armour moving again in the town.  The Fireflys both destroyed the 2 x German Tigers that were bothering us for the first half of the game.
- 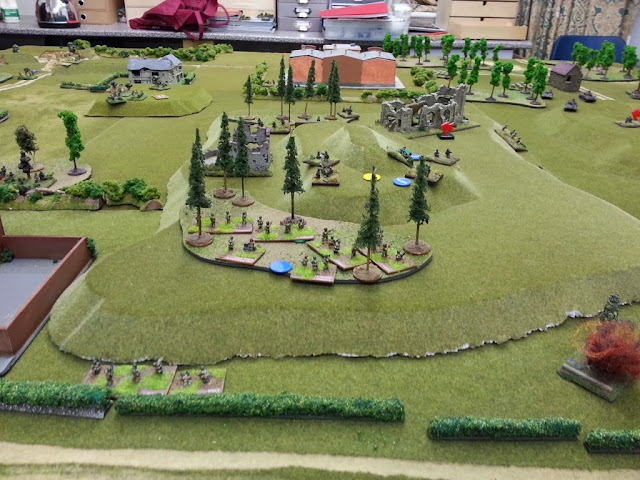 Theo's infantry in the wood trying unsuccessfully to take the hill.
- 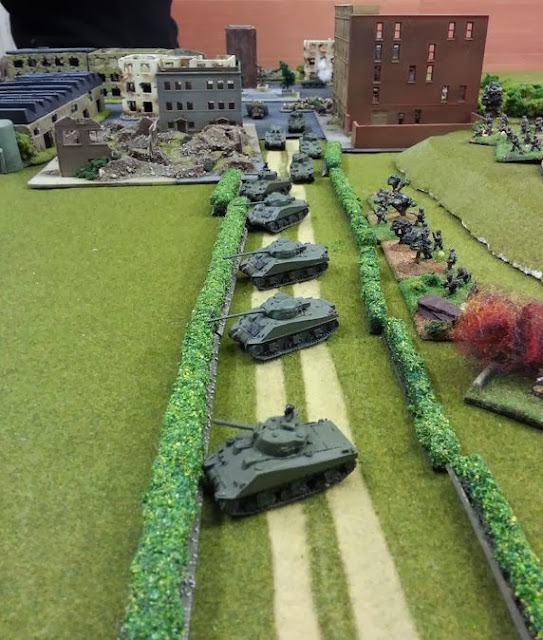 Brit amour out of the town starts to flank German tanks.  The German infantry behind them were unable to mass sufficiently to launch an attack, and were subsequently wiped out by Brit artillery and tanks.
- 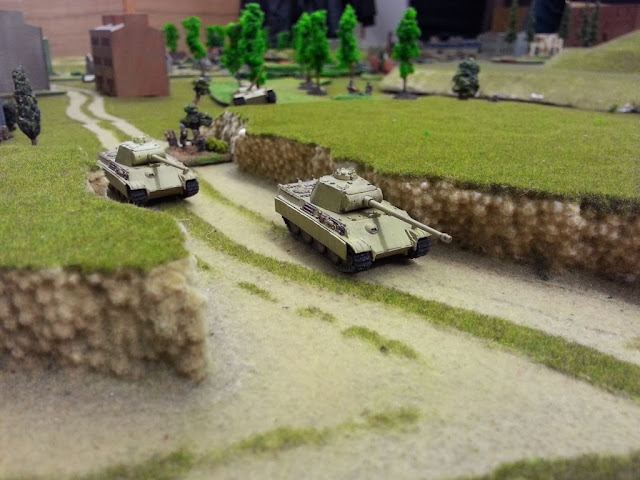 The 2nd German Panther platoon belonging to Steve keeping my M18s from getting near the objective. Worked for a while until they are overwhelmed by Shermans and my remaining TD platoon last night  Final result a victory for the Allies.
Posted by Vulture at 19:24 No comments:

"Tiger 1
Well known, UK based, Tiger 1 replica is now up for sale.
Built on a T55 tank chassis.
Completely manufactured from steel.
Runs and drives well, full power traverse and hand elevation.
Gas firing 88 mm replica main Gun.
Recent new steering brakes and clutch.
Ready to go.
Export worldwide no problem.
Highly campaigned in the Re-enactment world and ultimately one of the best replicas around.
Be ‘KING OF THE BATTLEFIELD’ !
POA"
- 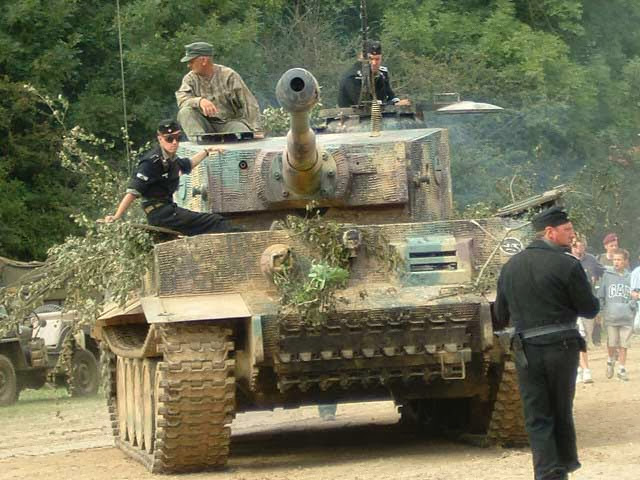 Stunning Ride in a RAF Typhoon

Post by War Documentaries.
Posted by Vulture at 19:02 No comments: