Absolutely nothing to do with wargaming, but one of my all time favourite U-Tube clips :-)
-

This is quite intersting, all about a WW1 U-Boat U40 that has been just been discovered.
-

A photo of one of the more unusual vehicles in my 15mm sci-fi collection.
Picked the vehicle up on a Bring and Buy stand at a convention many many years ago I think. From what I can gather it is part of the now defunct Zoids range.
-

Two things today. Firstly if you haven't checked out Marks 'Dropship Horizon' blog recently you need to do so. There is lots of great stuff to look at on there for anyone even slightly interested in 15mm sci-fi.
-
Here's a photo of one of my favourite 15mm models. A GZG Heavy Gunsled.
- 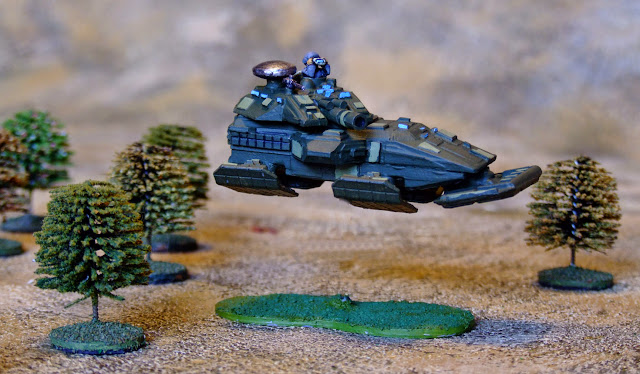 Today my Darkage II play by E-Mail (PBEM) game finished today. This is a simply but yet brilliant game set in Darkage Britain after the Romans had left and turned the lights out.
-

-
"Dark Age is a game of power and conflict in Dark Age Britain. The game system is simple and straightforward, with plenty of scope for skill and skullduggery, combining the finesse of Diplomacy and the fluidity of Risk. To win the game you must expand your population to become the dominant kingdom of Britain. Only warfare will provide the room for your population to grow, but only peace will allow you to secure your gains. Wars must be decisive, and your diplomatic efforts may be the key to victory. Life in Dark Age Britain is often short and brutal. Even a king had better find some friends and allies quickly, or he's likely to find that first contact is the pointy end of a sharp stick (we really mean this - you can be chopped up and out of the game in the twinkling of an eye - this is a fast moving game and you need strong nerves). At the start of a game the map is split between sixteen kingdoms belonging to the nations of the Scots, Welsh, Irish, Picts, Angles, Saxons, British and Vikings. At the end there will be only one, and it doesn't't have to be the English. History doesn't't always repeat itself. This is the age of Beowulf, of Arthur, of Alfred the Great, Eric Bloodaxe and Ethelred the Unready. This is an age of bitter war, of ever-shifting alliances and great population movements, as the kings and people of Britain pursue their destinies with sword and plough."
-
I took over a drop out position (Vikings, Yellow on the map) on Turn 11 and fought my way to an runaway victory on Turn 49. I can't recommend this game highly enough.
-
Here's a short movie showing my expansion across the map :)
-


Darkage-V1.wmv
-
The great thing about Software Simulations International the people who run Darkage is that you can have your first game for free. All the details can be found on their Darkage II web site.
-
Posted by Vulture at 21:27 No comments:

'When All Is Quiet' - STOP MOTION MOVIE

Felt inspired for another stop-motion movie just after I finished off painting another GZG vehicle, in this instance a V15-31A Kra'Vak Heavy Grav Tank. I've gone for an arctic camo scheme after seeing an F16 'Aggressor' aircraft painted in these colours.
-

My brother-in-law Mike was visiting at the weekend. He brought his lap-top along and joined with my son and I racing around in the Star Wars 'Battlegrounds' universe shooting the bad guys up. Great fun :)
- 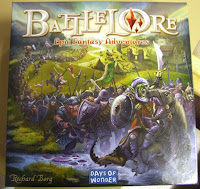 At the Club on Thursday night I had my first game of 'Battlelore'. This is a Fantasy Board game made by the same people who do Memoir 44. My opponent Joe had assured me it was an easy game to pick up, and I found he was correct in this. I don't intend to do a review of the game here, but suffice to say it is a well set up game for playing on a club night, one I would quite happily play again. As for the actual game I had, Joe was rolling very badly, fortunately for me this more then compensated for my tactical ineptitude and I managed to emerge victorious, although how I'm not quite sure :-)
-
Posted by Vulture at 06:59 No comments:

In the post today came the first of four Wings Of War miniatures that I ordered from Amazon at the weekend. I was somewhat surprised how small the aircraft was, although on reflection I shouldn't have been because the photos on the web show them to be not much larger than the cards in the box. Here's a small movie of the Sopwith Camel with a 15mm sci-fi figure shown for size comparison. - 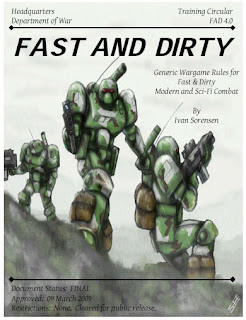 The free rules written by Ivan Sorensen called 'Fast And Dirty' (FAD) have been refreshed. Version 4 is now available to download. F.A.D. is a skirmish rules set for science fiction and 20th century. I would recommend anyone interested in sci-fi gaming to check them out.
Posted by Vulture at 20:18 No comments:

Yesterday I picked up a copy of the PC game 'Company Of Heroes'. This is a Real Time Strategy (RTS) game set in WW2 on the Normandy front. I can see why this game has been the success it has. The controls are easy, the game play is entertaining, and graphically it is beautiful. Below is a small movie I made of one of my Skirmish games using the screen capture movie software Camstudio.
-

My First Wings Of War Game + Vid Of A Restored Panther 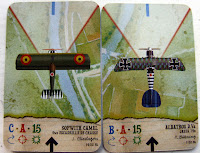 At the Huntingdon club I played my first 'Wings Of War' game. Suffice to say it is a well thought out nice little game, which is great for a club night. After roaming round the skies shooting away, my Sopwith Camel managed to down my opponents (Joe) Abbatros D.VA. Neither of us had played before but within 15 minutes we had the basic game mastered, so 10 out of 10 to the designers from that point of view. The miniatures you can buy to go with game look very attractive, although they are not cheap at £8 to £9 each.
-
On a completely different tack, I found this nice Video of a restored Panther on U-Tube that I'd like to share with you.
-

Realised that I hadn't gotten round to posting a stop-motion video I did in Feb before I restarted this blog. There's a lot of swearing in it, so it's not suitable for children and those easily offended. In terms of sequence, this should be watched before the one I posted on 2nd Mar where the 3rd Mech Company depart for the front.
-

After a bit of hassle with Windows Movie Maker, which delayed things, my latest Stop-Motion movie is ready :)
-

Not much activity today other than assembling a couple more new GZG vehicles. They are part way through getting an initial coat of gray spray. I'll start on with painting them tomorrow. On a different note altogether, anyone with a passing interest in Colonial Warfare should check out a web site of an old friend of mine (Ray), who attended the Huntingdon club for a number of years.

Changing tack again, here's some footage of the only running King Tiger in the world.
-