-
Comment:  This is totally brilliant, and very apt, as here in the UK the clocks change tonight.
-
Posted by Vulture at 16:17 No comments:

Picture Of the Week - No 42 - King Tiger Traffic Jam 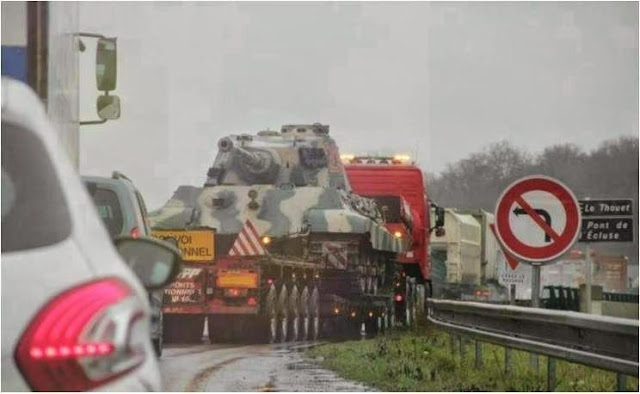 The attackers had a Hvy Grav tank and 5 Walkers + 2 Armoured Inf Squads and 1 x Power Armour squad against the defenders 2 x Heavy Grav Tanks, a Armoured Grav Flyer, couple of scout vehicles and several squads of Inf with ATGW teams scattered amongst them.
-
(Walkers all by made by Critical Mass Games as are a couple of the tanks.  I Grav tank by GZG, as are most of the Infantry and wheeled vehicles. Flying Grav Jet tank by Blade Miniatures)
-

-
An engaging game with an early exchange of Railgun rounds seeing one of Gavs Walkers knocked out and one of Marks damaged (seen below with Railgun KO'd) .
- 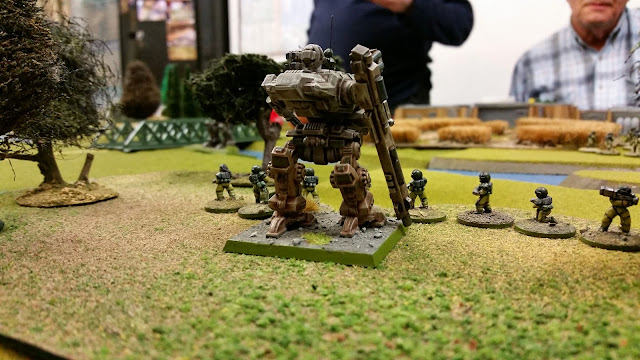 -
A further exchange saw both Simon and Chris losing their Grav tanks with my new Walker 'Vera' in action for the first time.
-

-
Mark brought his Power Armour Infantry up through the wood (seen below) and along with the damaged walker chewed out the opposing Infantry and then jump-packed into the town.
- 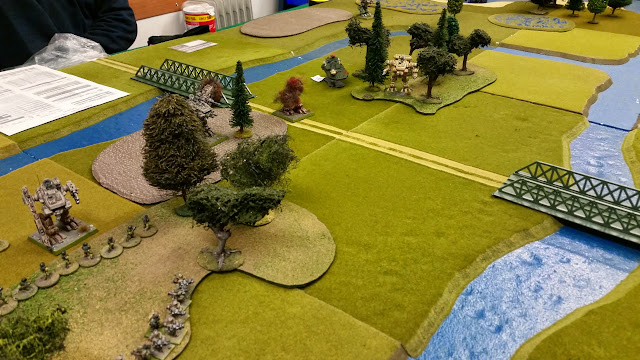 -
Micks wheeled scout vehicles getting destroyed in the process as Marks armoured Infantry advanced as well.
-

-
Gavin chewed up some Infantry and then moved his other Walker up.
-

-
Johns reserve squad kept its head down amongst the rocks supporting the flying grav jet.
- 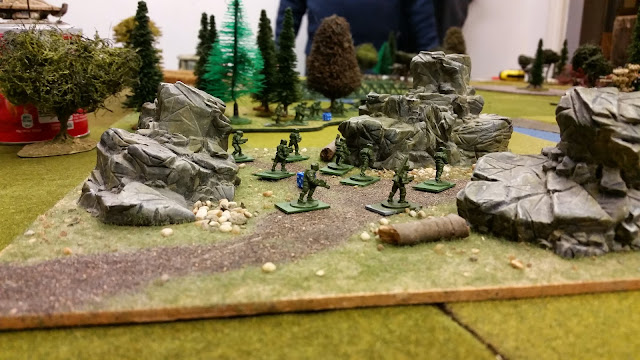 -
Gavin then jumped 'Vera' into close proximity to Johns surviving Grav tank, but this brave effort to breach the enemy line was in vain as John made his Initiative role and then destroyed her.
- 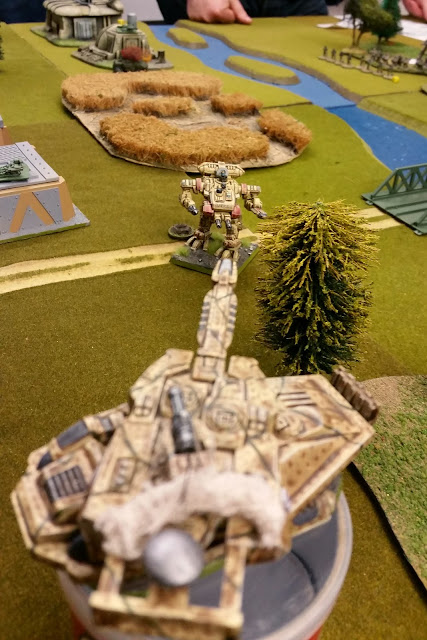 -
At that point we called an end to proceedings.  With regard a result, I judged a slight edge to be have been with Gav, Simon and Mark at the end.   A good game overall :)

Post game notes/thoughts:
1.  A slight tweak to the rules explaining Line of Sight (LoS) with regards to looking in and out of woods is required.
2.  The Infantry ATGW groups should have a +1 sight bonus to hit.
Posted by Vulture at 14:14 No comments:

All About That Bass - Postmodern Jukebox European Tour Version

I don't normally post music on this wargaming Blog, but this is a terrific version of the well known song 'All About The Bass' and definitely worth a listen :)
-

Felt inspired at the weekend to break out some terrain and take a few staged shots of my 15mm Sc-Fi Walker collection.
- 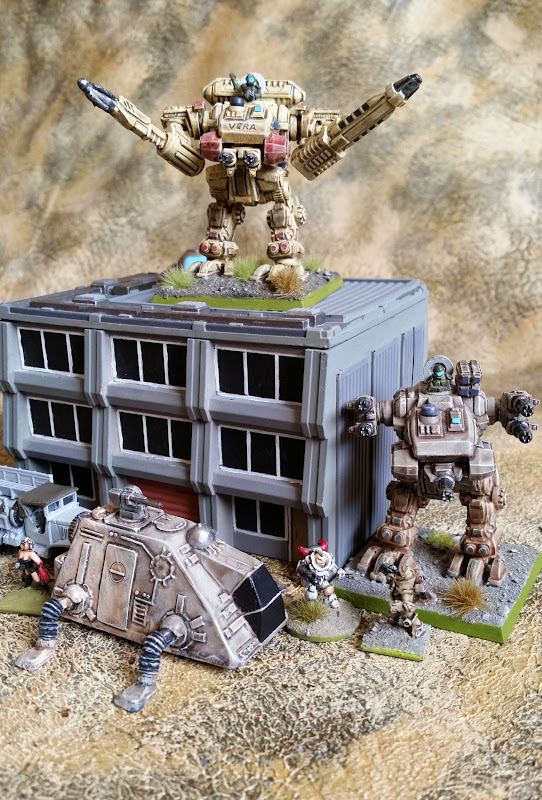 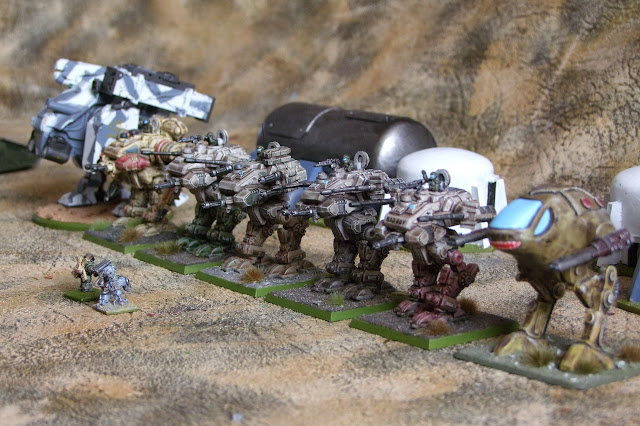 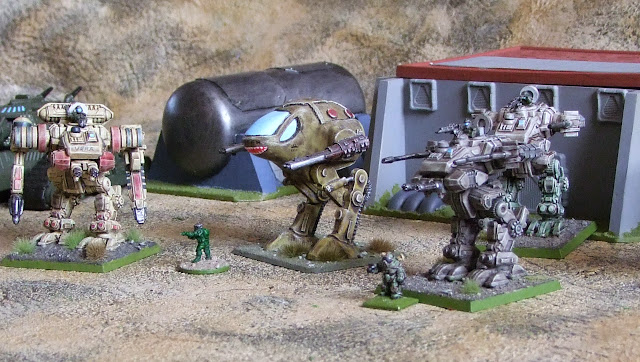 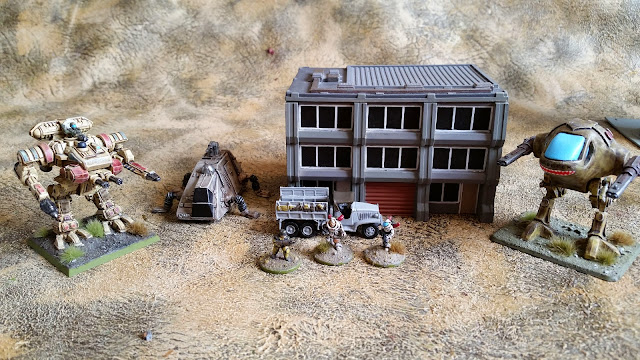 I'm meant to be focussing what modelling time I have available onto painting my 28mm Bruswick unit I posted about yesterday, but as is the way with wargamers, we get distracted...  In this instance I was looking at some 15mm Sci-Fi on the web and all of sudden felt inspired to build a Critical Mass Miniatures Walker I had picked up some two years ago at the Vapnartak convention.  Different from the four I already have, this one is an ARC Fleet Valkyrie variant which has jump jets on the back and a different arm arrangement.  Fortunately I had a bunch of rare earth magnets in my modelling box, so I've been able to articulate the movement of the torso, arms and chin weapon.
- 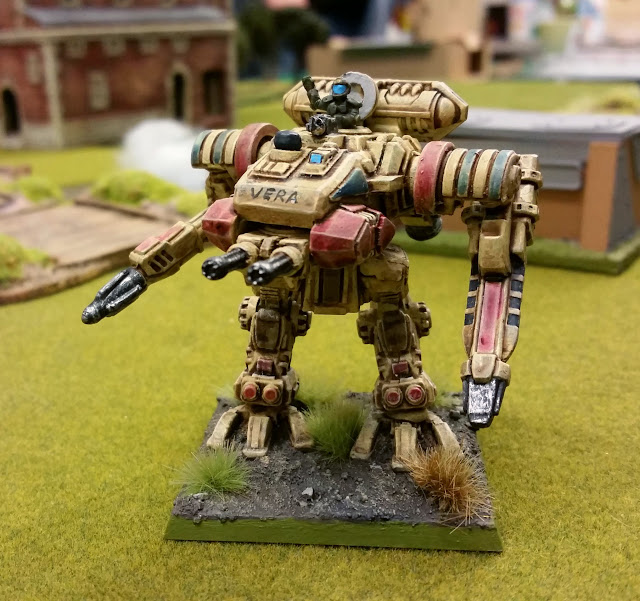 My son came up with the suggestion for the name, somehow it seemed appropriate :)
- 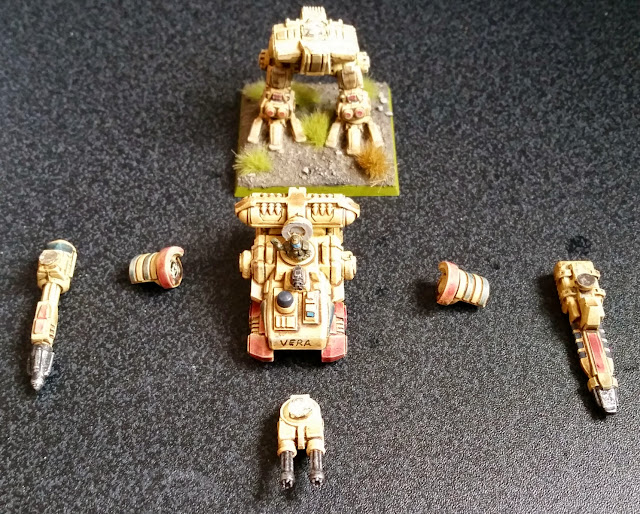 Picture Of The Week - No 41 - Zoid Cannon Tortoise 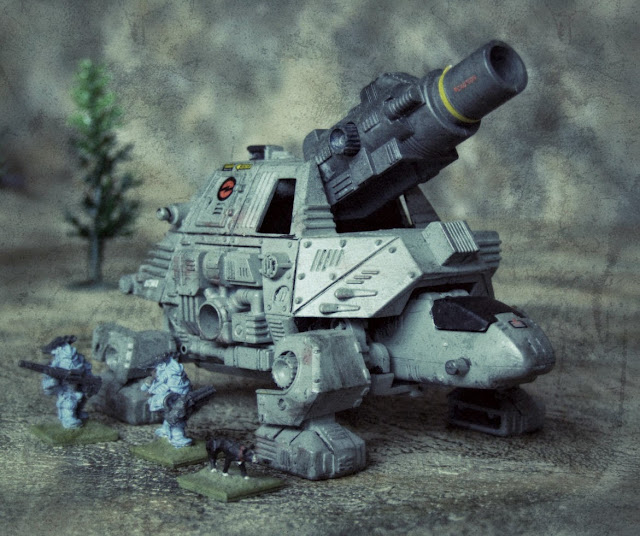 -
Comment:  This weeks picture is of a very old model I picked up off a Bring-Buy stall at a convention, probably over 20 years ago.  Fits great with 15mm Sci-fi figures.  The model in question is a Zoid Cannon Tortoise.  Currently thinking about using it in a game I'm planning as a 500mm Siege Mortar, that can fire a variety of shell types.
- 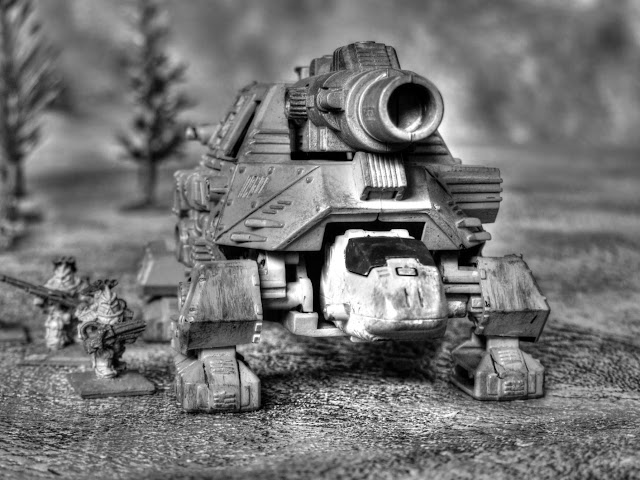 With it coming up to the 200th anniversary of the Battle of Waterloo there is a lot enthusiasm at the club for doing a re-fight of this classic battle.  We've opted to use the Black Powder rules and use 28mm figures, mainly because a couple of our group already had some.  After steadfastly resisting getting into this period as I've so many other wargaming interests, I succumbed and agree to become involved.  A few weeks backs now I picked up at the Vapnartak show a small Brunswick Brigade. The figures are Perry Miniatures (metal) and are quite nice.  (Here's a selection)
- 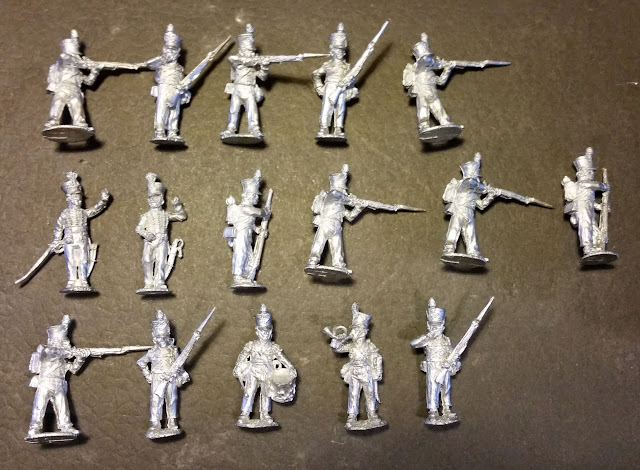 -
My friend John Savage is doing most of the organising for this game, and has produced a comprehensive listing of the units involved in the battle that we need to field.  From the units outstanding I selected the Brunswicks for three reasons:

1)  The unit isn't too big, being only 2 Regts of Infantry, a small Calalry Regt. a Gun and a HQ.  Hopefully this means its an achievable aim in terms if getting it painted and ready for mid-year.

2)  The figures don't need assembling.  I know plastics are cheaper, but gluing them together is a ball-acher.

3)  Their uniform is really plain being mainly black, and so is easy to paint !  LOL

Anyway, here's the first Regt I'm on with.  Still some work to do, but definitely making some progress here.
- 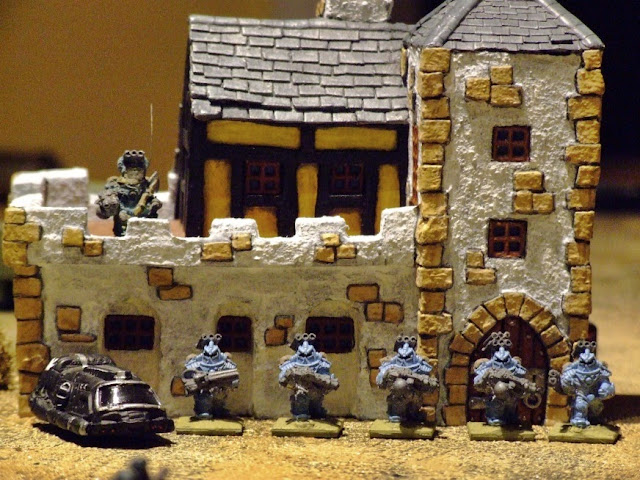 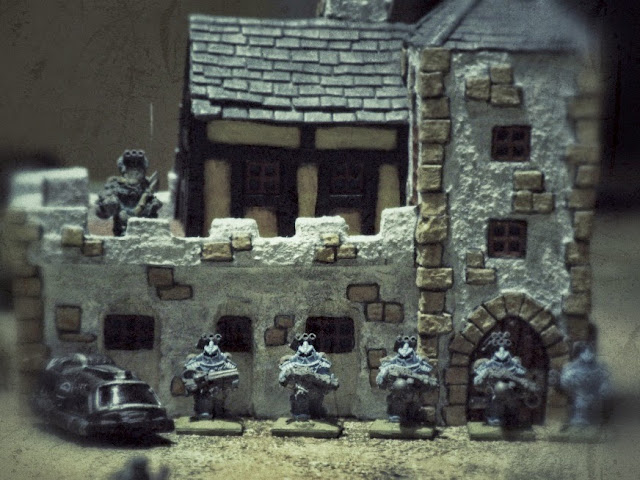 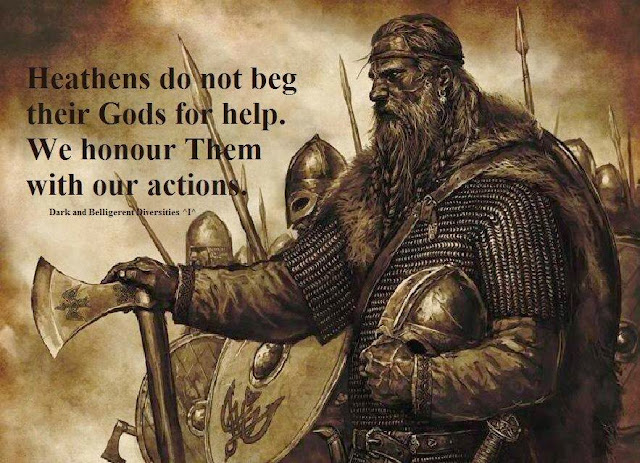 Our fabulous Black Labrador 'Jed' was 12 this week  :)   He takes things at a slower pace these days, but is doing well for his age.
- 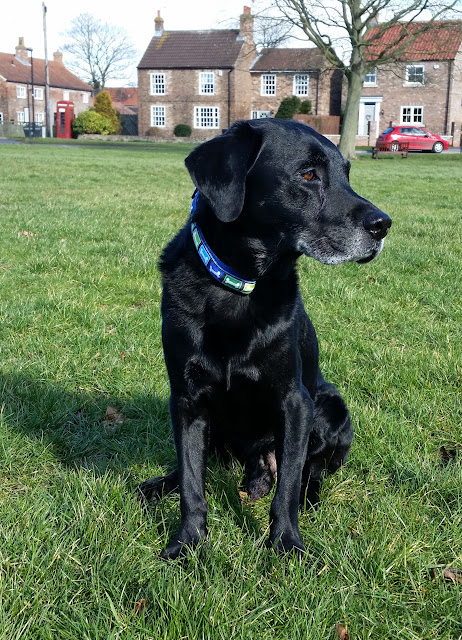