Last night my brother-in-law (Mike) and I went to see Avatar at the local cinema in Huntingdon. I'm useless at writing reviews, so I don't intended to try here, suffice to say, for anyone interested in sci-fi this is a must see movie on the biggest screen you can find !! Totally awesome, with a richness of sci-fi hardware on show to impress even Alien 2 fans. We both gave it a rating of 9.0 out of 10.
-

Curently staying with the out-laws over X-mas. My brother-in-law 'Mike' pointed me in the direction of this festive clip on U-tube.
-

Very little figure activity going on in the house at the moment, although Alex and I have have been playing lots of Company Of Heroes and Dawn Of War on the PC. I saw a posting on the TMP today about The Scene withdawing his range of 15mm Orcs soon, so I thought I'd get 30+ before they are gone forever. In the post came a 3 tank plattoon of Critical Mass tanks, but I've put them aside to open tommorrow.
In the meantime for WWII fans I found this fascinating clip on U-Tube showing Albert Ernst and his Jagdtiger X1 during the surrender of sPzJgAbt 512 at Iserlohn in the Ruhr pocket on April 16,1945.
- 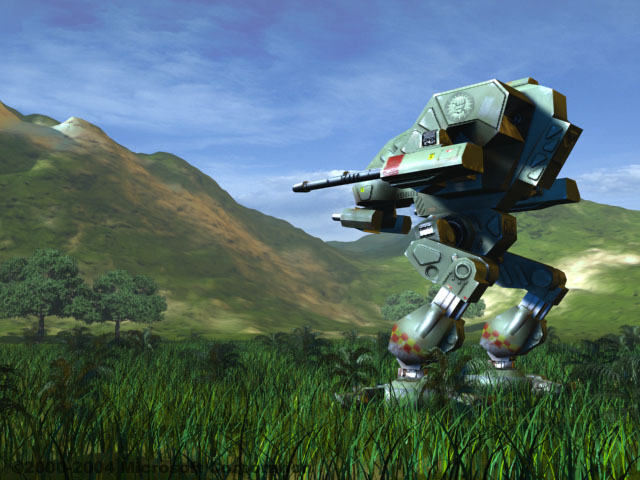 -
Slightly old news, but interesting none the less, apparently a new Mechwarrior game is in production. Imaginatively titled 'Mechwarrior 5' some of the photos I've seem show excellent looking in-game graphics.
-
This trailer on U-Tube is pretty good as well ! :)
-

Been playing Homeworld 2 with my son. This is quite an old game now, but the graphics and game play are still excellent. Worth picking up if you can get a copy.
-

This short video on U-Tube of the famous WWII German 88 Flak gun in action caught my attention. There is some outstanding footage contained within it.
-

Guys, check out this short film called "Ataque de Panico!" (Panic Attack!). It features giant robots invading and destroying Montevideo, the capital of Uruguay.
It is 4 mins 48 seconds long and was made on a budget of $300 (£186). So far it has had more than 1.5 million views on YouTube. Hollywood is som impressed they have asked the producer to make a full length film.
-

Ever wondered what the inside of a Trident submarine looked like ? This short BBC news clip gives an interesting insight. Link
-
On a totally seperate subject, I took the plunge and ordered the ARC Fleet Heavy Grav Tank Platoon tanks from Critical Mass Games. For me, as soon as I saw them some weeks back, the question was not if I should buy them, but when...
-
Posted by Vulture at 23:05 No comments:

When you’ve lost your legs, do you lose hope? The Sunday Times had exclusive access to some of the most seriously wounded young soldiers. One is his brother. Their stories — and humour — reveal extraordinary courage. Link
-
I found the above piece very moving. Well worth reading.
-
Posted by Vulture at 20:01 No comments:

Stumbled across this vid of a Russian built BAT-M crushing a line of cars. No doubt, that is a tough vehicle with loads of power, I want one !! :)
-
Background:
In the late 40’s the Soviet troops required a heavy artillery tractor to tow their super heavy guns and the upcoming nuclear missiles. One of them was the legendary AT-T based on the very early chassis and lower hull of the T-44 and later T-54 tank with 500mm wide tracks and a 13 teeth sprocket wheel. On the basis of this very strong artillery tractor several other heavy engineer vehicles were also derived. One of them, the BAT-M (also known as a “Way Builder”), featured a huge blade that was pivoted back when marching or being transported and a 2-ton crane installed at the rear part of the vehicle.
-

Afrika Korps + A Joke For The Weekend

This is an intersting site on the Africa Corps, that is worth checking out. Link.
-
Joke For The Weekend - Dead Duck

A woman brought a very limp duck into a veterinary surgeon. As she laid her pet on the table, the vet pulled out his stethoscope and listened to the bird's chest. After a moment or two, the vet shook his head sadly and said,
"I'm so sorry, your Duck, Cuddles, has passed away."

The distressed owner wailed, "Are you sure?"

"How can you be so sure?" she protested. "I mean, you haven't done any testing on him or anything! . He might just be in a coma or something."

The vet rolled his eyes, turned around and left the room, and returned a few moments later with a black Labrador Retriever. As the duck's owner looked on in amazement, the dog stood on his hind legs, put his front paws on the examination table and sniffed the duck from top to bottom. He then looked at the vet with sad eyes and shook his head. The vet patted the dog and took it out, and returned a few moments later with a cat.

The cat jumped up on the table and also sniffed delicately at the bird from head to foot. The cat sat back on it's haunches, shook its head, meowed softly and strolled out of the room.

The vet looked at the woman and said, "I'm sorry, but as I said, this is most definitely, 100% certifiably, a dead duck."

Then the vet turned to his computer terminal, hit a few keys and produced a bill, which he handed to the woman. The duck's owner, still in shock, took the bill.

This site is worth checking for the free paper terrain you can download. Link
-
Posted by Vulture at 00:02 2 comments:

What never ceases to amaze me about WW2 is just the size and scope of the forces in play and the number of battles fought. Quite by accident today I stumbled across a reference to Operation Hailstorm. This it seems was a truly devastating strike on a Japanese naval base called Truk. Well worth a read. Link.
-
Posted by Vulture at 22:53 No comments:

This thread on the CMG forums is well worth checking out. Link. Craig is making some sci-fi terrain boards for a display game at next years SALUTE convention. He is making excellent progress, and the scratch-built model he has been showing in recent weeks is just brilliant. Can't wait to see what it looks like when painted up.
-
Posted by Vulture at 00:01 No comments:

These are superb cartoon animations. If you have ever owned a cat, you will love these :)
-

Stumbled across this link to a site called MiniWar Gaming who are giving away a free E-Book on warhammer terrain. Link
-
Completely unrelated, but here is short vid of an impressive close escape by the occupants of a HUMVEE as a roadside bomb goes off.
-

This is a funny on U-Tube that my brother put me onto. Definately worth a look :)
-