This gallery is worth checking out for some fantastic dioramas.  Link

This little movie on U-Tube by Pixar is excellent !  Link
-

A compass shows the direction the plane (Heinkel 219) was when it crashed. The guns are corroded by many years on the ocean floor. Metal rods reveals that the pilot’s ejection seat was never released. But what else is hiding the story behind the German plane on the ocean floor, the museum staff and aircraft enthusiasts see if they can uncover. Link
-

I followed a link to this this quick film about various Allied Living History groups taking part in a WW2 private battle in Apr 2012. The M10 looks fantastic.
-

A Lincolnshire farmer has told how he spent 15 years trying to find a lost squadron of Spitfires that was buried in Burma at the end of the Second World War. Link
-

The Federation of British Historic Vehicle Clubs (FBHVC) try to encourage everyone with a historic vehicle to get out and about in it on a particular day in the year. This what their web site says: "Drive It Day is always held on the nearest Sunday to 23 April. This date was chosen in 2005 to commemorate the 64 cars that set off from London on 23 April 1900 on the first day of the Thousand Mile Trial. An incredible undertaking and one which we believe deserves an annual celebration."
-
As we seem to have a break in the rainy weather here Cambridgeshire, after checking the fluid levels, we decided to take the truck out for a spin. After a very reluctant start where a couple of squirts of 'Easy Start' (an Ether based aerosol) were required to get the engine to fire up, we had quite a pleasant ride out. We were looking out for other historic vehicles on our 18 mile round trip, but sadly didn't see any !
- 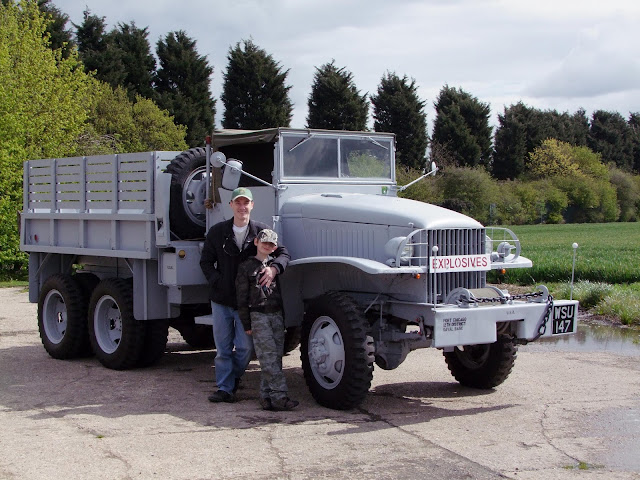 -
Last weekend I picked up a set of replacement leather straps for the wooden bows that go over the cargo bed.  The straps are used to fasten then canvas up. Anyway, these straps are New Old Stock (NOS) ex French army.  No idea how old the (vacuum sealed) pack is, but it almost seems a shame to open it up.
-

US Army Chaplain Father Emil Kapaun stole, suffered and sacrificed his life for his fellow soldiers in a Korean prison camp. Six decades after his death, he is being considered for the Congressional Medal of Honor - and sainthood. Link
-
Posted by Vulture at 20:47 No comments:

A small German firm offers a unique service to the country’s construction industry: It uses historical British and American aerial photography from World War II air strikes to determine the location of unexploded bombs. Thousands of tons of bombs still lie in the soil and the duds are becoming more dangerous. Link
-
Posted by Vulture at 14:47 No comments:

Inside the US Army’s Secret Cold War Ice Base

Check out this article about a semi-secret, nuclear-powered U.S. Army base that was built under the Greenland ice cap only 800 miles from the North Pole. Link
-

The old favourite 'Panzer General' has been remade and is available as a free download.  I've tried it very briefly myself and it seems to work fine. Just make sure to also download the InstallCCPack.msi in the addons folder as this contains all the battles and campaigns. Link
-

The Bovington Tank Museum publishes an on-line magazine.  The Feb version is worth checking out. Link
Posted by Vulture at 19:32 No comments:

Back on the move again after 70 years: A mighty Tiger 131 is put through its paces for anniversary challenge

With its huge cannon and almost impenetrable armour, the German Tiger tank struck fear into the hearts of Allied troops. Although more than 1,300 were produced during the Second World War, this is the only working example in existence. Tiger 131 has been restored to its original war time specification after a two-year restoration project costing £80,000.   Read more:  Link
-

Two men were sitting next to each other at a bar. After awhile, one guy looks at the other and says, 'I can't help but think, from listening to you, that you're from Ireland ...'

The other guy responds proudly, 'Yes, that I am!'

The first guy says, 'So am I! And where about from Ireland might you be'?

The first guy responds, 'So am I!' 'Sure and begorra. And what street did you live on in Dublin ?

The other guy says, 'A lovely little area it was. I lived on McCleary Street in the old central part of town.'

The first guy says, 'Faith and it's a small world. So did I! So did I! And to what school would you have been going'?

The other guy answers, 'Well now, I went to St. Mary's, of course.'

The first guy gets really excited and says, 'And so did I. Tell me, what year did you graduate'?

The first guy exclaims, 'The Good Lord must be smiling down upon us! I can hardly believe our good luck at winding up in the same bar tonight. Can you believe it? I graduated from St. Mary's in 1964 my own self!'

About this time, Vicky walks into the bar, sits down and orders a beer. Brian , the bartender, walks over to Vicky, shaking his head and mutters, 'It's going to be a long night tonight.'

'The Murphy twins are pissed again.'
Posted by Vulture at 22:19 1 comment:

As a modeller and gamer, over the years I have bought several vehicles that have had flimsy little sticks sticking up at the front of them, as seen on this Sdkfz251/7.
- 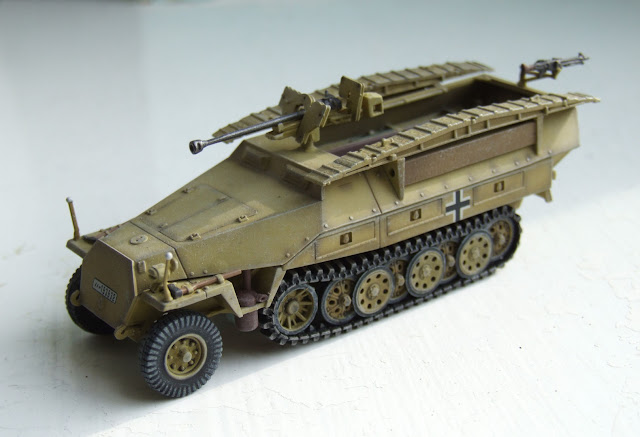 -
For long enough I wondered what they were, and found that inevitably they get damaged/broken off unless real care is taken.  I have now acquired some of my own and fitted them to the truck, although in real life they are a lot more substantial being made of metal rod. Visibility sticks are used as driving aids to help you judge the size of the vehicle.  In my case especially useful because of the winch (90ft of cable) which extends the length of the front by about 20".  Sat behind the wheel you cannot see the end of the vehicle, but with the sticks I can see the white balls, and better judge clearances.
- 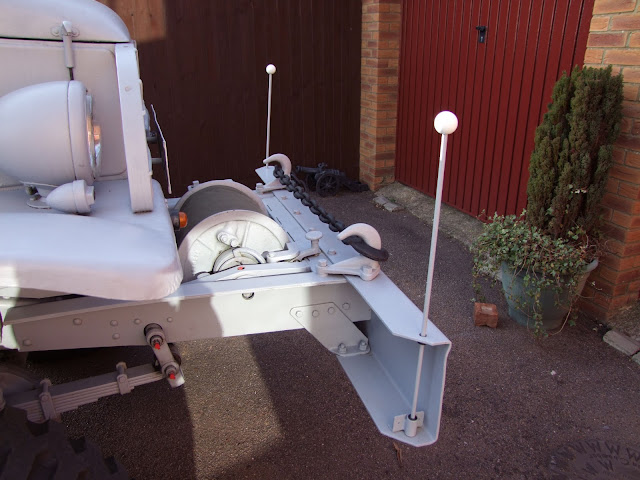 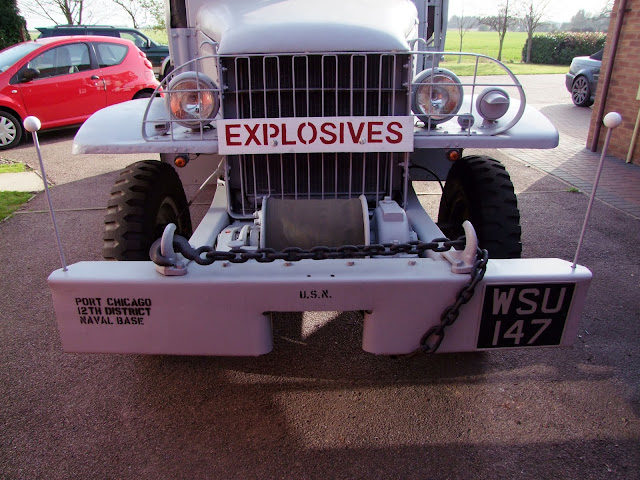