In the Apr 2016 edition of Wargames Illustrated is an article about a Lion Rampant variant for the Napoleonic period, called 'Eagle Rampant'.  Although currently deep in the middle of our club 13 player Dragon Rampant 'Badlands' campaign, John S suggested we take a week off to try the conversion out; so last night after our club AGM we had an eight player game on our 8ft x 6ft club table.  Each player between 3 and 4 units, points varied but most had 12.  The Eagle variant is so similar to Lion Rampant and Dragon Rampant that those familiar will be right at home with the rules from the off.

The clean living, god fearing Brits took on the filthy frog-leg eating French (perhaps you can guess which side I was on :) ).  The objective was a baggage train stuck on a bridge.  Both sides had to try and take control of the objective.

I started south of the river (my unit was 2 units of Line Infantry (4pts each) and 2 Skirmish units (2 pts each) along with Theo S.  Facing off against us was John E.  To the north in a defensive posture were John S and Mick with more Brit Infantry and some Cavalry facing off against Simon A, Chris J and Gavin M.

From the off lots of desperate actions broke out all over the table as the two sides clashed !  John S was rapidly overwhelmed north of the Church and Chris J and Gavin then rolled into Mick M and gave him a battering.  Theo S's troops didn't do much for a while other then take a beating from French skirmish fire (poor initiative rolls), but then my Skirmishers and a line unit reinforced him.  John E after a valiant exchange was crushed and the axis of the battle changed.  Simon A troops took a beating off Theo's and mine Skirmishers and he was out,  Mick J's and Chris's last troops also fled.  The final shots were between Gavin Theo and myself as we fought around the baggage train.  In the end Theo and I managed to hold on, but it had been 'a damn close-run thing'  :)

Myself, I felt the game went brilliantly and was well entertaining, provoking a large amount of good natured banter.  To my mind this is a good measure by which to judge how enjoyable a game has been on a club night :)  Well done to John S for setting up a well balanced game.  We'll certainly be playing Eagle Rampant again in the future :)

Anyway, here is a selection of photos from the game.  Great looking figures (I'm sure you'd agree) by John S, Theo S and Gavin M.
- 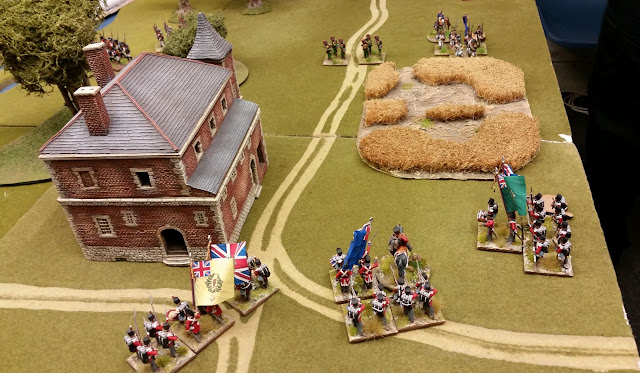 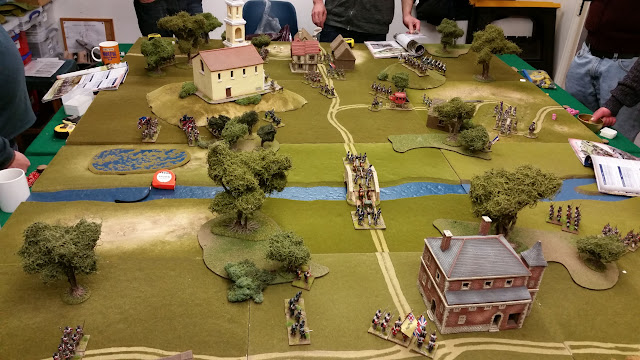 Early in the game look North.
- 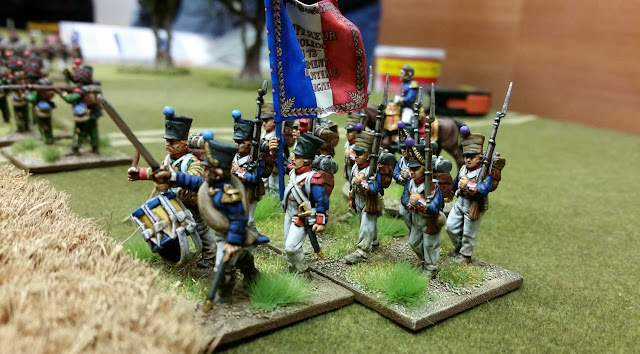 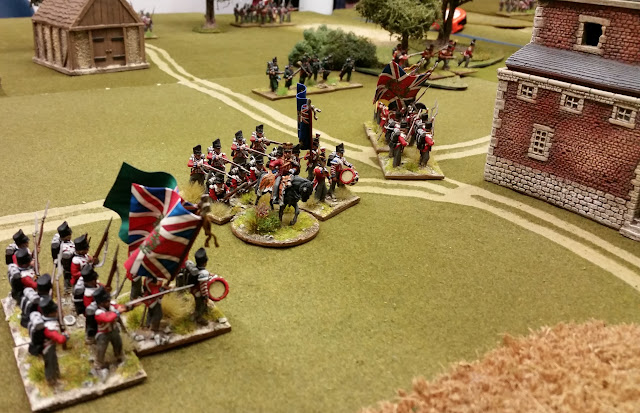 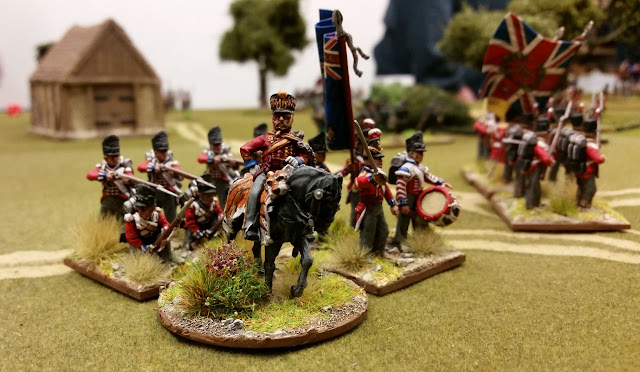 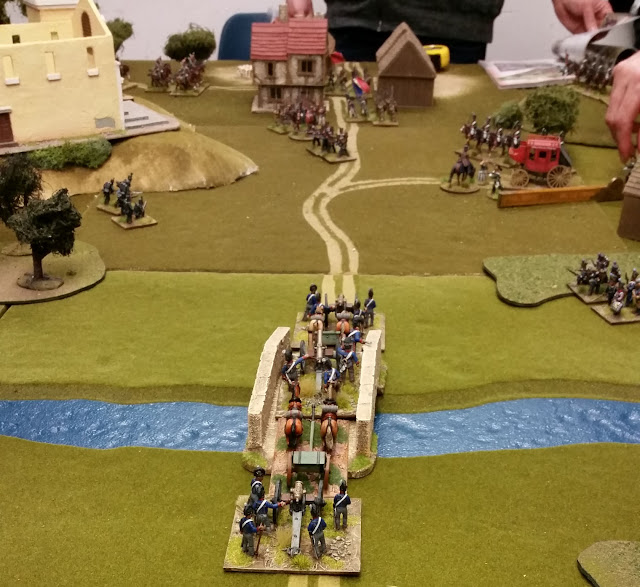 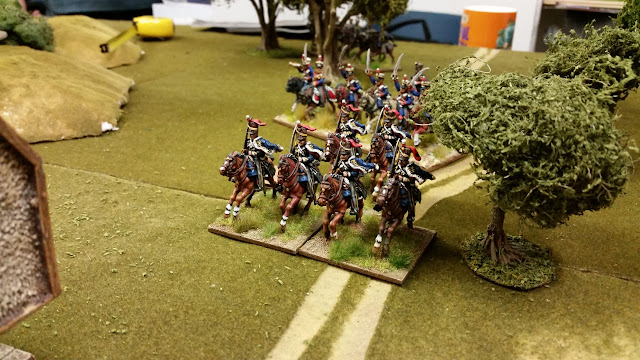 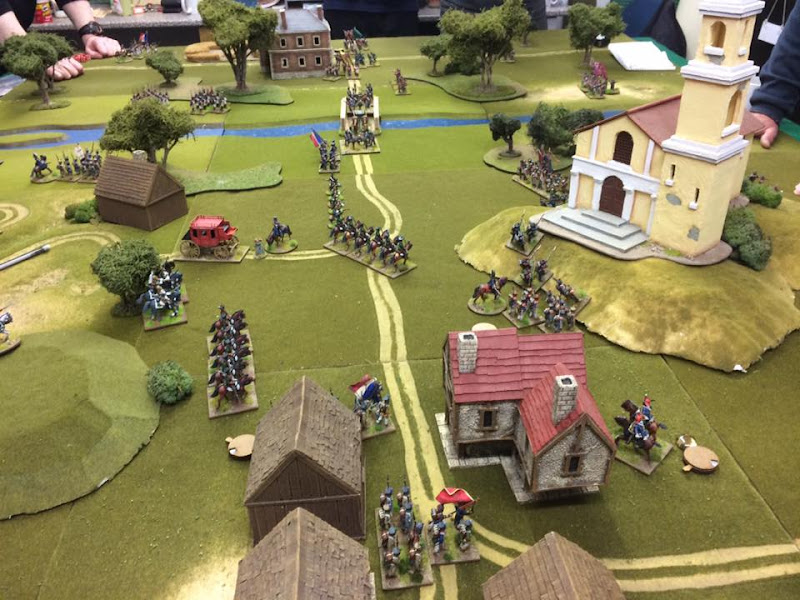 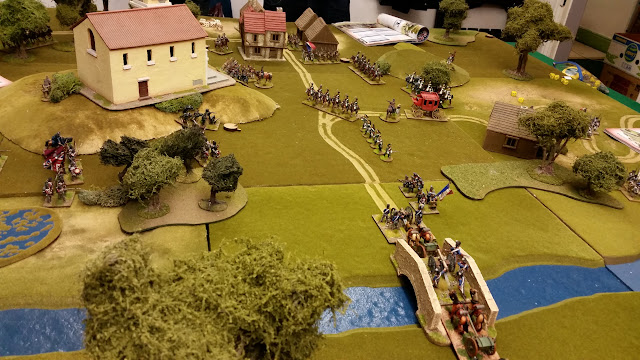 Things are starting to look grim for the Brits (on the left) as weight of numbers tells.
- 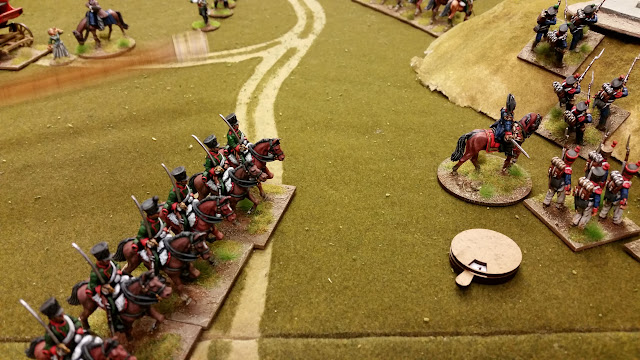 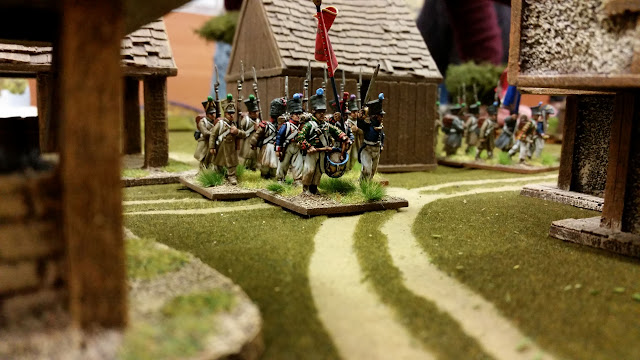 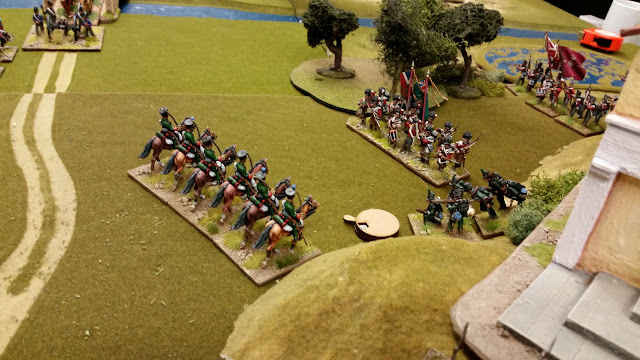 Mick's Brits are under some pressure.
- 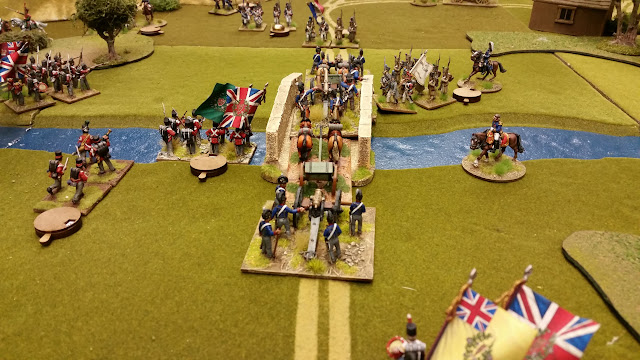 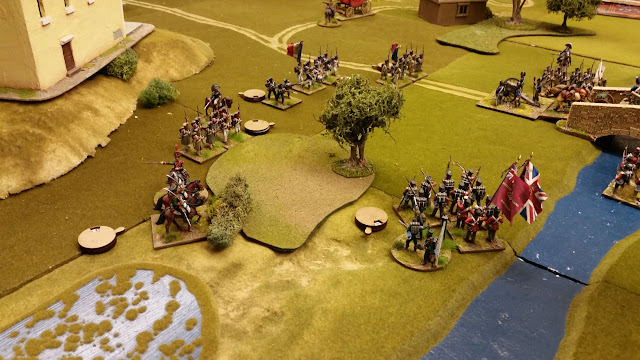 Remains of Chris's cavalry and Gavins Infantry take on my Line Infanty (nearest unit) and Theo's (just in sight to the right) wading through the stream.
-
Posted by Vulture at 18:42

Very inspiring. This will make us beat the bushes to get the April WI issue and will help ease the endless wait for "Men Who Would Be Kings", due in the Fall. Hopefully this Eagle version has been reasonably well tested and provide balanced play.

Our first game, but initial impressions were that it was well balanced :)

Vulture,
Hi again. I think it's notable that you describe the first published version of "Eagle Rampant" as "well balanced", as opposed to fabulous or fun or something you want to play again quickly.
It was interesting that in the article, author Arthur Wells-Lee stresses his relative lack of knowledge in Nappy skirmishing and the sister article on the Perry brothers scenario concluded this attempt was a starting point for some more robust Nappy period rules.
With that in mind, wondering if you've come across any articles or contributions online about a deeper adoption of the LR engine for Nappys - which I think many gamers would like to see.
As well, it's worth noting that Osprey has a "Chosen Men" Nappy skirmish rule book due out in the fall - and of course the Lardies have just released Sharp Practice 2.
Still hoping for more buzz on "Nappy Rampant".
- W

Walter
I really enjoyed the game, and was just commenting that I thought the sides were well balanced :)
My gaming crowd will no doubt be trying out Sharp Practice 2. With Napolionics I'm more 'along for the ride' with my frinds than having any real in-depth interest in gaming the period or expanding much on my small Bruswick unit :)

How di y'all play artillery? I'm ready to put on a 54mm game and wanted to see some decent rules for light or medium guns please...thanks!
Steve Miller
DFW Irregulars-Southern Front

Hi Steve
Although there was a gun in our game, it was one of the objectives and didn't fire. If I recall correctly the organiser of our game was talking about an artillery battery of 2 guns having a 48 inch range, 12 dice hitting on a 5 or 6 at over 12" 4-6 under 12".
Cheers
Ian

Thanks! We'll give this a go and follow up!