Well guys, after a couple of weeks delay whilst the previous owner sorted a few things out I finally got my WW2 truck. GMC CCKW 352B1 Registration Number WSU147 all 5.1 tons of her is parked up occupying a large part of my drive.
The adventure started last Friday evening when I caught the train from Huntingdon in Cambridgeshire up to Knaresborough and stayed with my old school friend Chris Jenkins. Up early on the Saturday morning his long suffering wife Diane took the pair of us over to the little village of Hunmanby (near Filey) for 08:00 where we met with the owner David and his brother-in-law Stuart Kinroy (also a 352 owner). The truck had been moved from when I first saw it into a open barn. My first thought was 'Holly shit I am never going to fit this on my drive and be able to get into the garage. Julie is gonna kill me!' more on this later however... After a final look round the truck David and I shook hands on the deal, cash was exchanged, and we went an organised a Tax disc in the local post office. Due to it being classed as a historic vehicle it is tax and MOT exempt, but notwithstanding that, a Tax disc still has to be obtained and displayed. Stuart then took me out for a driving lesson during which I dropped a £ 100 worth of fuel into the trucks 40 gallon tank. On the narrow bumpy roads around Hunmanby driving the truck for the first time was quite an alien experience. To start with I'm on the wrong side of the cab (left hand drive), a lot higher than normal; the steering wheel is huge and due to the size of the tyre side wall there is lots of play in the steering; as there is no sound proofing there is lots of noise, the gearbox is crash one, so I'm having to double-de-clutch which I've never done before and furthermore the layout of the gears is not like a conventional car. Put all this together plus the sheer size of the vehicle and the large turning circle required to manoeuvre and I'm starting to think 'What the hell have I done here !' Anyway, at 10:15 we were ready to set off, and in the photo below shows Chris, David and I just before Chris and I left his house.
- 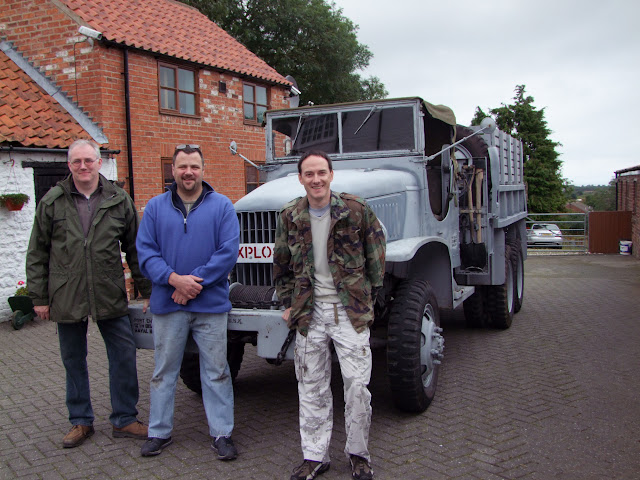 -
To get home we had decided upon a route which took us south across country towards Driffield, where we could get on the main roads, and cross the Humber Bridge. What a total nightmare we had for those 15 miles across country! Dodging traffic, and trying to get to grips with the gearbox made for an exciting time to say the least. Getting into top gear was a real problem until we worked out the ideal speed at which to change. All I can say is, its a good thing they made those gearboxes tough, for it got some real abuse.
Eventually we made it to the main road, and things became easier, and we could maintain a higher top speed, although it quickly became apparent that the most comfortable cruising speed was between 35 and 37mph. In theory you can go up to 45mph with an engine governor limiting you at that point, but in practice there is so much suspension shake 41mph was the most we touched.
Now the truck was thoroughly warmed up we could start to appreciate the heating system in the cab, however this system is different to modern ones, in that you can't turn it off ! LOL Heat radiated through the floor, and was blown up though various openings for levers, an especially by your right leg, which over a period of time gets slowly cooked ! LOL
Anyway, after collecting several big queues of traffic behind us and stopping a couple of times to left people pass we made it to the Humber bridge where we stopped for a quick change over.
- 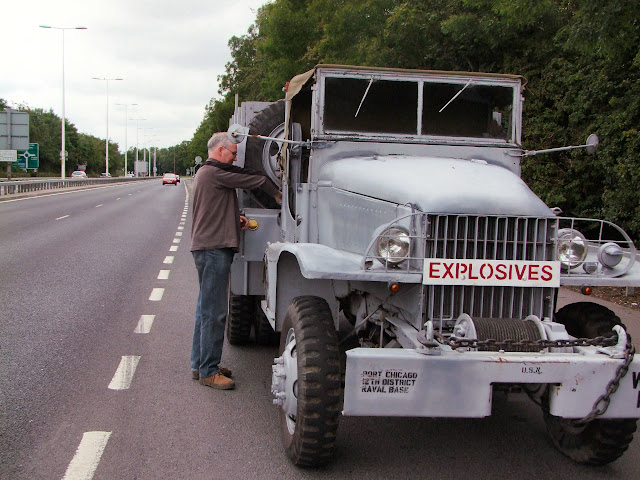 -
Heading towards Lincoln we stopped for a quick break and to grab an sandwich. A further check round the truck revealed that the we had a slight leak of brake fluid from the front n/s wheel. We tracked this down to the flexible brake hose that needed tightening. Without a manual at this stage I couldn't find the brake reservoir to check the level, no sign of anything remotely resembling such a thing in the engine compartment. A quick call to Stuart remedied this puzzle. You access it from a small cover plate in the cab floor, obvious really eh ? (not).
We then pushed on opting to take the long route round Lincoln rather than fight our way through it, and joined the A1 near Newark. A stop for some extra fuel was required (another £ 50), then we cruised home arriving in Warboys at 17:15.
- 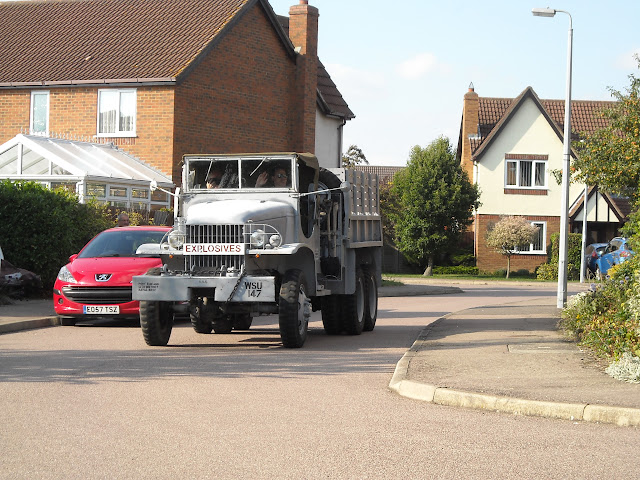 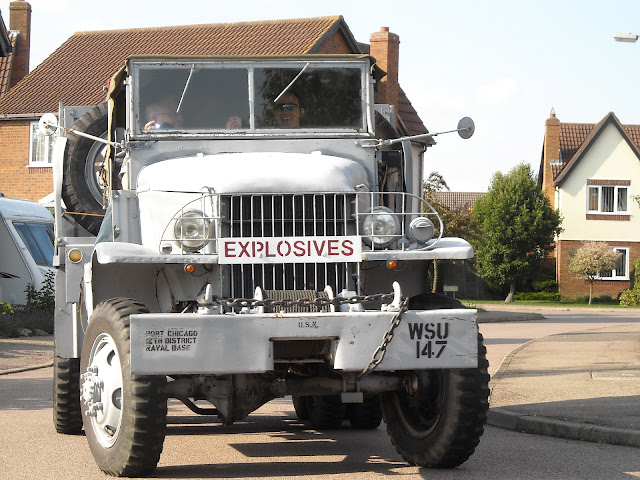 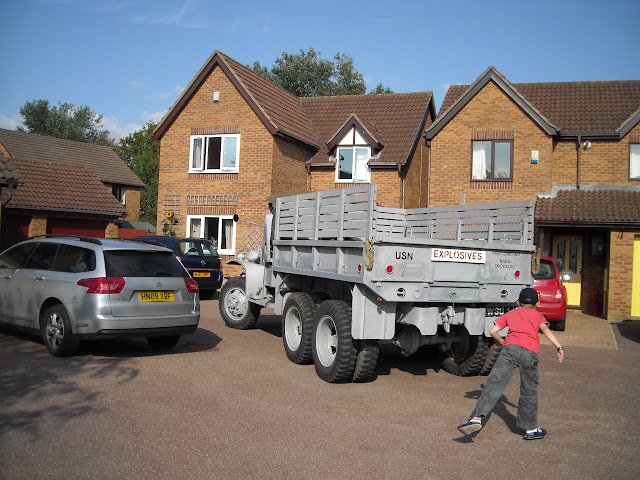 -
Safety parked up on the drive, it was a relief to find that I hadn't miscalculated and I can get to my garage! :)
- 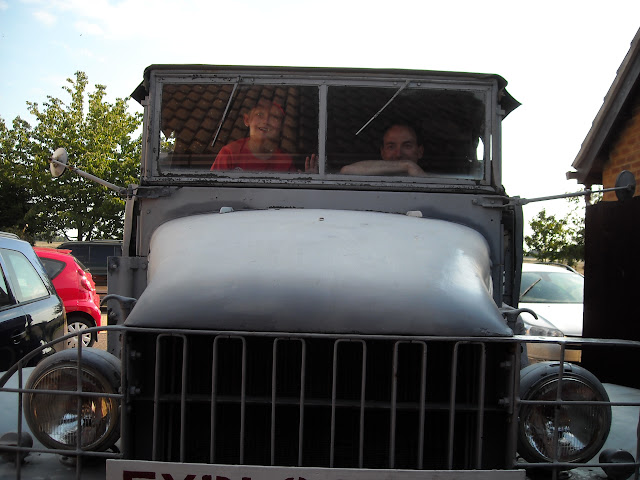 -
Here's a couple of photos of the family by it for the first time.
- 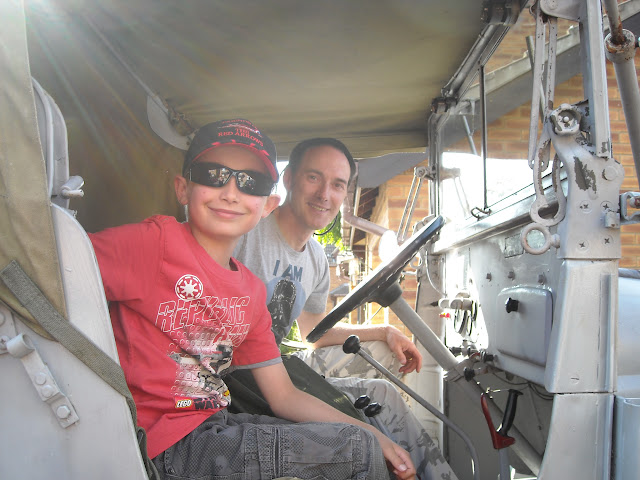 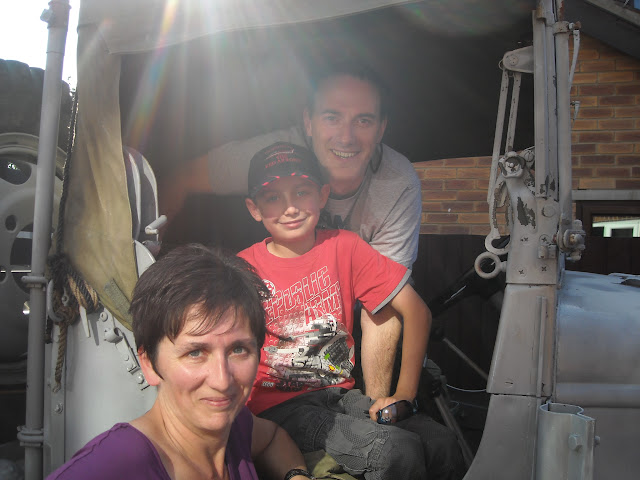 -
In the evening we all went down to see my parents and my brother Bruce and his family who were over visiting. My little nephew Toby was quite impressed.
- 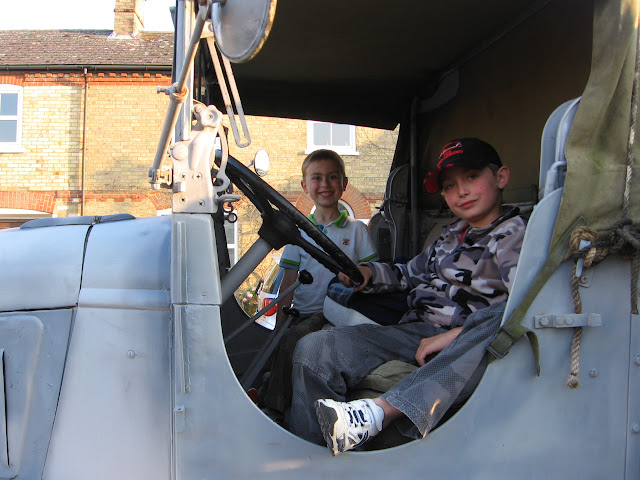 -
My mother and father were pretty non-plussed it had to be said ! LOL Bruce who has recently fully restored his Triumph Stag took great delight in a supportative brotherly kind of way, by crawling over it and pointing out lots of stuff that needs attention ! LOL
- 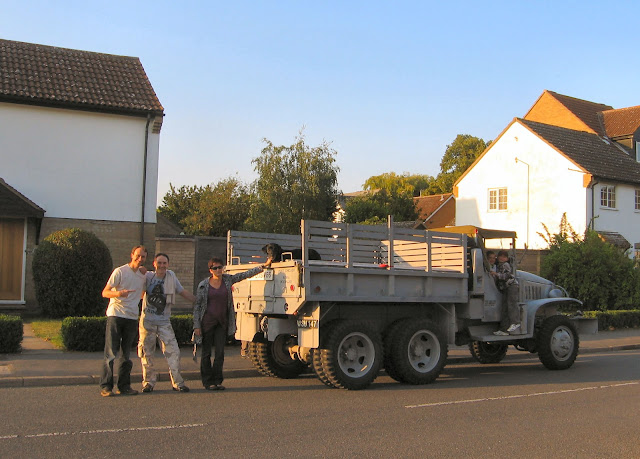 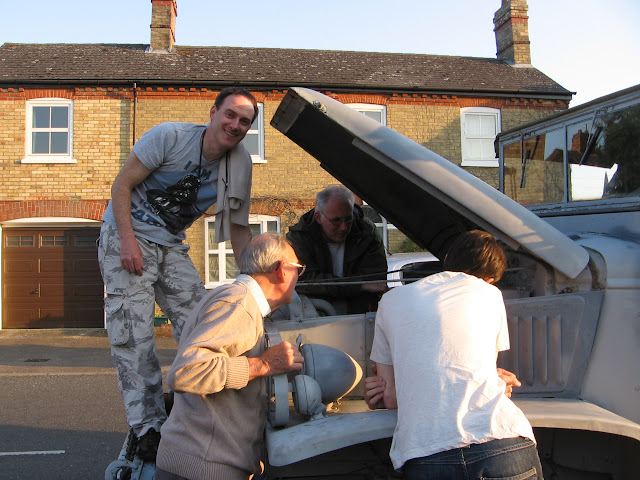 -
My thanks to Chris for his support and encouragement during what was to say the least, quite a memorable day.
-
Now to have some fun with it... :)
-
Posted by Vulture at 06:31

The ride smooths out once you have some load on, generally takes a ton or so.... Spent much of my youth driving that vintage and class of trucks. The Joys of farm living.