Frustration is crappy weather like this over the weekend when I'm wanting to get a door-skin off the truck to sort out some rot on it :(
- 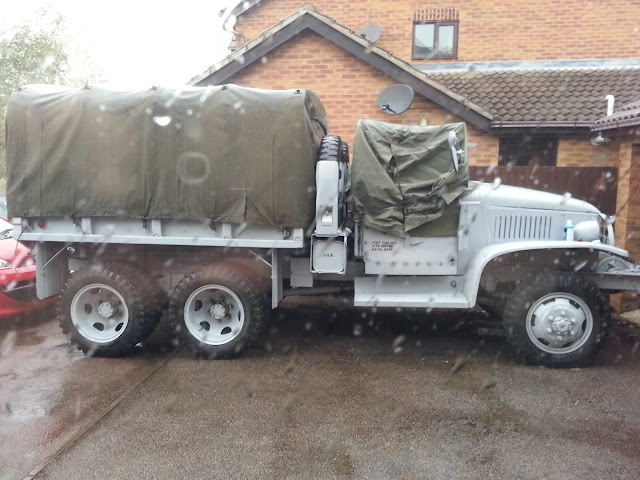 A Soviet missile base in Germany that spy planes never saw

It was top-secret in 1959 and remains almost completely unknown to this day - the first Soviet nuclear missile base outside the USSR. But it is still there, crumbling and steadily being reclaimed by nature in the forests north of Berlin.  Link to the BBC.

A restored World War II troop landing ship ran aground in a western Kentucky lake but was not damaged and has returned to its Indiana home port, the ship’s captain said. The LST-325 was freed from mud in Lake Barkley Oct. 3 using a tugboat, the ship’s anchor winch and its engines in full reverse, Capt. Bob Jornlin told the Evansville Courier & Press.
The ship became stuck with 42 crew members aboard during a rainstorm Oct. 1 when officials say it traveled outside the lake’s Cumberland River channel. It was returning to its Evansville dock on the Ohio River after a trip to Tennessee for stops at Nashville and Clarksville. Jornlin said the ship, which was part of the 1944 D-Day landings in France, was built to be run aground as it carried troops, tanks and other equipment.
“It’s a tough old bird,” Jornlin said.  Link
Posted by Vulture at 18:12 No comments:

REUE is the story of 2 American soldiers lost in enemy territory after an ambush. After taking one of the enemy hostage they soon realize they are not too different. A short film Directed by James Cawley made entirely in the state of Utah for under 3K. The short has won multiple awards and has shown at festivals nation wide (Action on Film, Foursite Film Festival, Short Shorts Film Festival and more).
Comment:  Stumbled across this on U-Tube.  Worth watching.

This is quite entertaining :)


It's seeing this sort of video that puts me of trying parachuting !  LOL
-
Posted by Vulture at 08:41 No comments:

For many years now I have used the Web Shots web site to store and share my photographs. At the last count I had 3,379 photos and 65 videos stored in 48 albums that has had 173,652 views. About 80% of the photos on my Blog are linked back to that site (at a rough guess over 300+). A couple of days ago Web Shots announced they are going to rename themselves 'Smile' and change their operating model. With effect from 1 Dec it all photos will have moved to a new address, and it will not be possible to share them publicly. To say I am furious would be a understatement. The work involved in finding another site, like Flickr for example, uploading Gigs worth of photos, and then having to re-establish the photos links will take hours and hours and hours. Then what's to say that Flickr don't then do the same thing ? I am so pissed off.
-
Posted by Vulture at 09:43 3 comments:

As the secretary for my local branch of the Military Vehicle Trust (MVT) one of my duties is to write up a report on the activities of our Huntingdon Area for inclusion in the quarterly club magazine 'Windscreen'.  I thought I would share part of the article here on my Blog which pertains to a recent road run we did :)
--------------

After the enjoyable time had on our May road run our second run of the year scheduled for 16 Sep was much looked forward to.  Fortunately the gods smiled upon our endeavours and extended the good weather experienced in early Sep up to that weekend.  Meeting up again at a start location near Kings Ripton in Cambridgeshire we doubled our previous numbers and gathered together 14 vehicles and 29 people for our trip which we grandly entitled ‘The Glatton Memorial Road Run’.  After a driver briefing given by our event organiser Andy Miller we hit the public roads in convoy at around 13:00.  Setting off was one of the moments in the day that I wish we could have bottled, as the organised chaos that ensured as we pulled out was just brilliant.  Heading initially south west we joined the old A1 near Alconbury where we turn north and after a couple of miles stopped for fuel and air at a convenient petrol station.  Our convoy of 3 Jeeps, an Austin Champ, 2 Land Rovers, a 1942 Harley-Davidson Motorcycle, a Dodge WC52, a monster 12 ton URAL truck and 5 GMC CCKWs (one of which had a M45 Quadmount in the back) made an impressive sight and had other motorists stopping and taking photos and turning round and driving back past for another look. 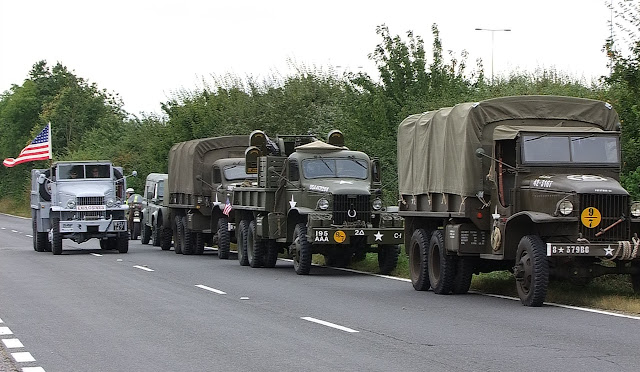 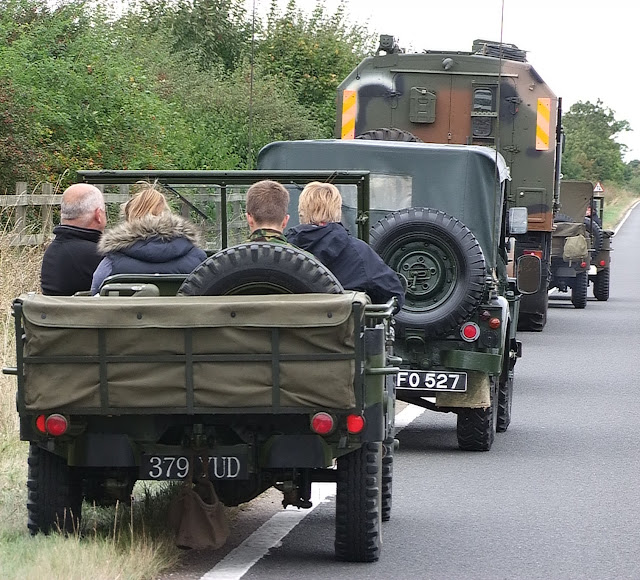 Continuing north we stopped at the Memorial to the 457thBombardment Group (H) which commemorates the 86 aircraft and 718 men who were KIA/MIA or POW during operations in 1944/45. 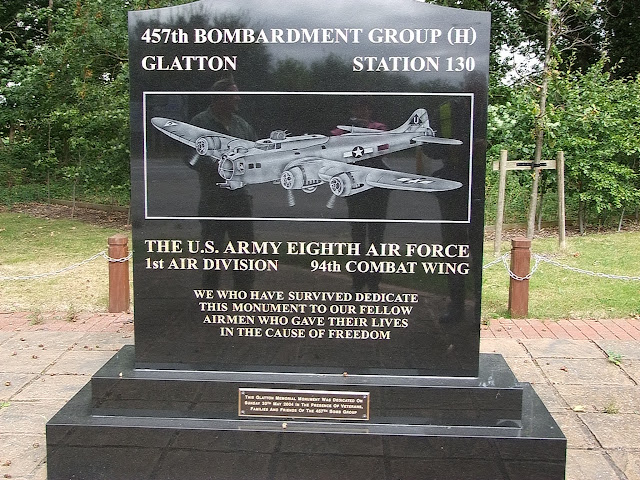 After paying our respects we laid a card with the following poem written by one of our members Andrew Griffiths.

For some the wait was not to cease
It was those who would feel no peace
Where their loved ones once stood, today we stand
Thanking them for our peaceful land.

A debt is owed we cannot repay
But we didn’t forget,
We came today.

May God Bless all those souls that fought for freedom and paid with the ultimate sacrifice.
You are not forgotten.

Remounting we turn east and headed through Conington village and then travelled down a public road that used to be the SW/NE runway of RAF Glatton.  At the end of this we pulled into which operates from one the remaining runways, and parked up by prior arrangement by the windsock for a photo call, and a welcome cup of tea for those who wanted one in their café. 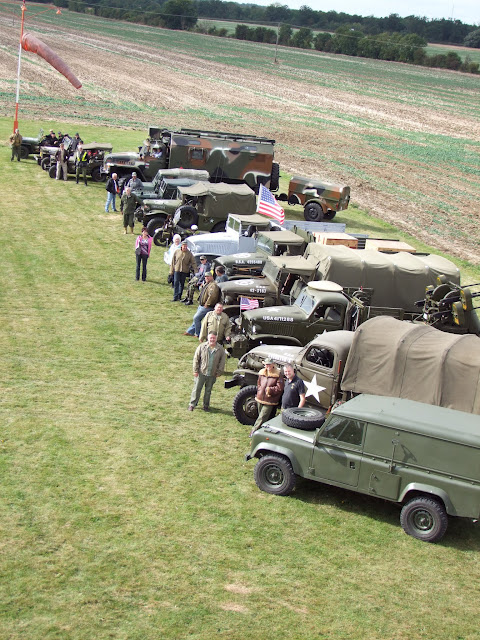 Continuing on, no sooner had we set off than a potential problem with the route became apparent. A tiny bridge with a 5 ton weight limit presented a challenge to our 12 ton Ural, 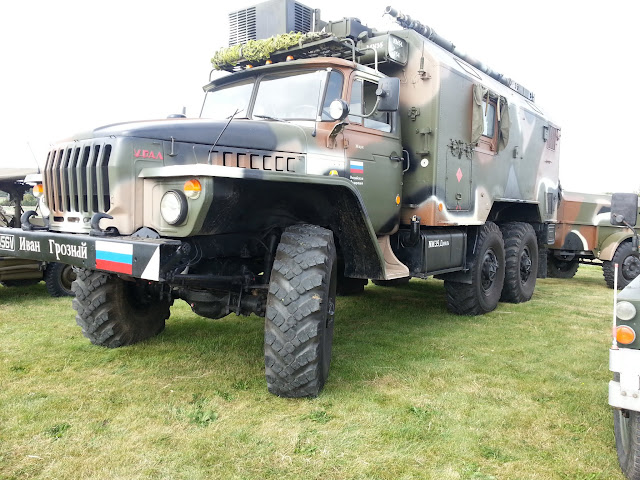 but after considering the position we proceeded on the basis that the vehicle was so large and the bridge so small only one axle would be on it at any one time!  The last half of our journey took us through the outskirts of Holme village after which we broke into open fenlands for the run into Ramsey and the WW2 Militia Camp which was our destination.  The custodians kindly opened up their NAAFI facilities for tea and coffee and our happy band finished off the day with a picnic tea. All in all a terrific day with lots going on, and accordingly lots to enjoy. The entertaining route worked well with RAF Glatton providing a great focus for the whole event.

There is quite a good article on the Battlefront web site about the Panzerschreck that is worth reading.  Link A British team building a car capable of driving beyond 1,000mph has tested the vehicle's rocket engine.  Link to the BBC. 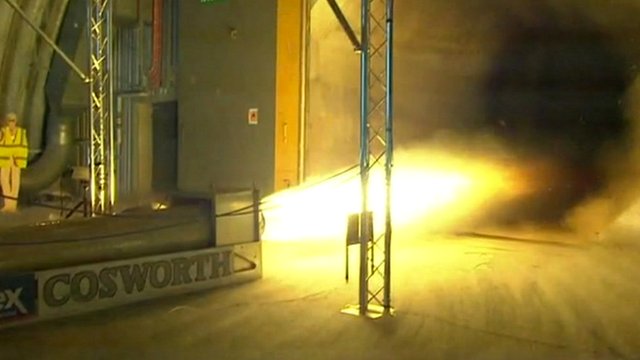 Footage taken from the co-drivers seat of "Heavy Hitter" a WW2 U.S. Army M36 Tank Destroyer during the Public battle at the Victory Show, Cosby, Sept 2012.
-
-
Posted by Vulture at 22:24 No comments: