Air Commodore Peter Cribb, who has died aged 92, was one of the most successful and gallant master bombers of the Pathfinder Force; he flew more than 100 wartime operations, including one when he made an unauthorised raid on Hitler’s retreat at Berchtesgaden. Link
-
Posted by Vulture at 20:23 No comments:

The Roman Emperor Hadrian, who came to the throne AD117, claimed that the gods had instructed him to "keep intact the Empire", so he planned a massive wall to defend its northern boundary against the unruly tribes beyond. There is an interesting article on the Independent On Sunday site about new discoveries. Link
-
Posted by Vulture at 08:20 No comments:

Stumbled across this story yesterday. SS Richard Montgomery was an American Liberty ship built during World War II, one of the 2,710 used to carry cargo during the war. The ship was wrecked off the Nore in the Thames Estuary in 1944 with around 1,500 tons of explosives on board, which continue to be a hazard to the area. Link
-
Posted by Vulture at 14:00 No comments:

Found this interesting site that deals exclusively in old 'classic' PC games. They are all available for download for very reasonable prices. Link
-
Posted by Vulture at 09:38 No comments:

There is a very interesting recent thread on The Miniatures Page (TMP) web site about AFV Combat Speed. Well worth a read, many of the postings are very entertaining and informative. Link
-
Posted by Vulture at 08:41 No comments:

These are some of the lowest fastest passes you will ever see, fabulous !
-

Recent Purchases - For My 15mm Sci-Fi

You know what it's like....you see something (a model or piece of scenery) and immediately think, that would just go brilliantly with X !! Well in my case this happened twice in the last month. I stumbled across some AT-43 mechs on E-Bay, and also a piece of Kryomech scenery. In both cases the manufactures are now out of business, only the gods know if we will ever see them again in production. Although both pieces are designed for 28 and 25mm, I think they look fine with my 15mm Sci-Fi collection. For scale comparison I've included a few 15mm figures and vehicles.
- 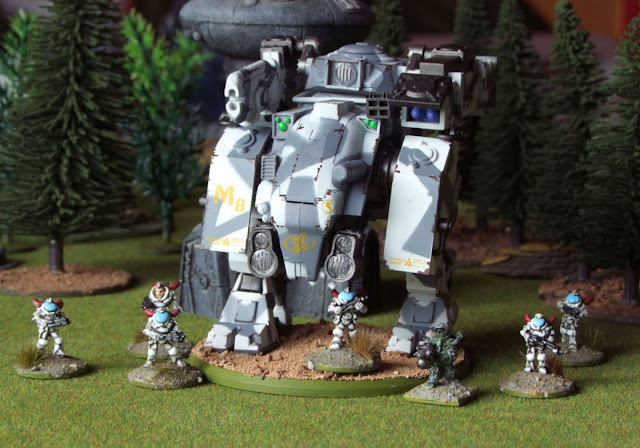 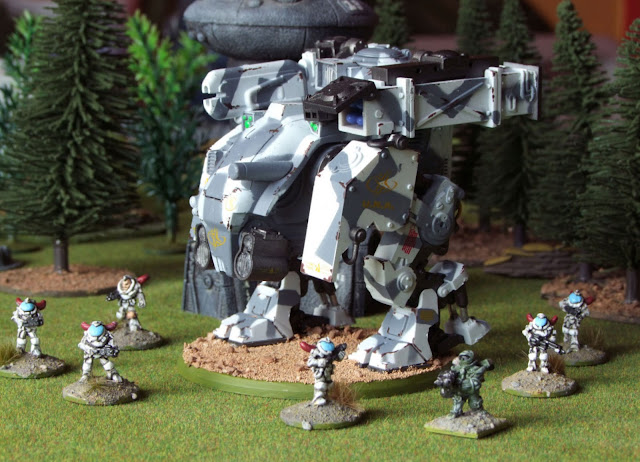 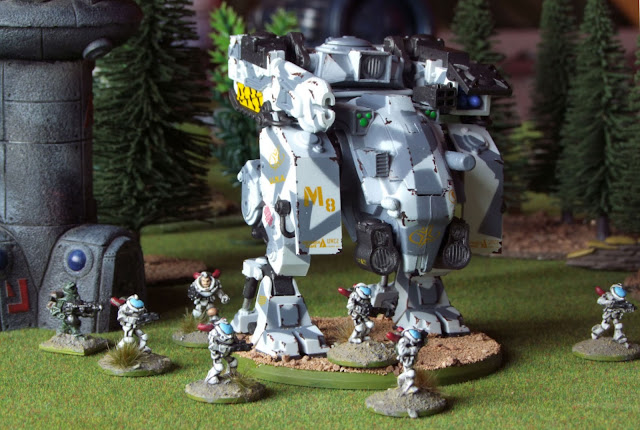 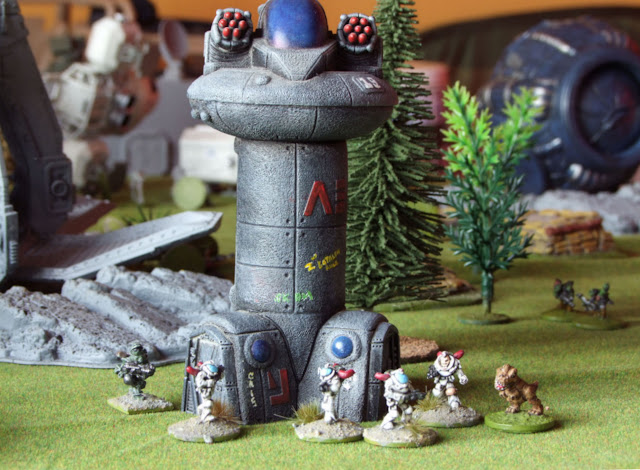 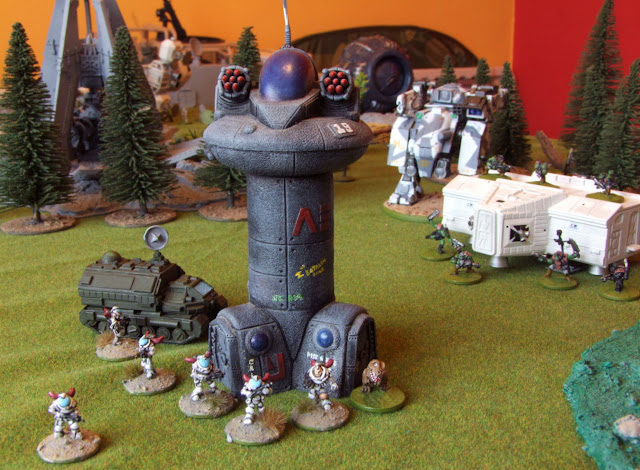 Above is the Kryomech Anti-Aircraft Tower. Figures in the foreground by Blue Moon, vehicle by GZG.
-
Posted by Vulture at 21:20 9 comments:

Invincible, pride of the Falklands, is broken up in knacker's yard There is nothing good at all about this, my favourite ship getting broken up :( Link
-
Posted by Vulture at 22:13 1 comment:

Newly released photographs show how a team of World War II experts disrupted Nazi plans to bombard Britain - with the help of 3D glasses like those in modern cinemas. See the BBC web site for more info. Link
-
Posted by Vulture at 22:14 1 comment:

Archaeologists are beginning the most detailed ever study of a Western Front battlefield, an untouched site where 28 British tunnellers lie entombed after dying during brutal underground warfare. For WWI historians, it's the "holy grail".
See the BBC web site for for info on this interesting story. Link
-
Posted by Vulture at 14:45 2 comments:

After having dug to a depth of 10 feet last year, Lancashire scientists found traces of copper wire dating back 100 years and came to the conclusion that their ancestors already had a telephone network more than 100 years ago.

Not to be outdone, in the weeks that followed, a Cumbrian archaeologist dug to a depth of 20 feet, and shortly after, a story published in the Windermere Times : "Cumbrian archaeologists, finding traces of 130-year-old copper wire, have concluded that their ancestors already had an advanced high-tech communications network 30 years earlier than Lancashire".

One week later, the Yorkshire Post reported the following: "After digging as deep as 30 feet in his backyard in Bawtry , South Yorkshire , Amos Thwaite, a self-taught archaeologist, reported that he found absolutely f--k all. Amos has therefore concluded that 150 years ago, Yorkshire had already gone wireless."
-
Posted by Vulture at 23:05 No comments:

Check out this video I found on U-Tube of a WWII German Hetzer SPG being dragged out of the Baltic sea !
-

A memorial is to be unveiled in a Cardiff cemetery to a survivor of the Battle of Rorke's Drift.

Newport-born Edward Savage was 20 when he fought in the battle, immortalised in the film Zulu, in South Africa in 1879. See the full article on the BBC web site. Link
-
Posted by Vulture at 10:19 1 comment:

Apache helicopter: A tour around the attack aircraft

The British army's fleet of Apache attack helicopters have clocked up a landmark 100,000 flying hours, a third of which have been flown on operations in Afghanistan.

The Apaches are flown on operations by 3 and 4 Regiments Army Air Corps, based at Wattisham airfield in Suffolk, where the BBC's Caroline Wyatt was given a tour of the aircraft by Captain Murray Nicol. Link
-
Posted by Vulture at 06:47 No comments:

In the 1400's a law was set forth in England that a man was allowed to beat his wife with a stick no thicker than his thumb.
Hence we have 'the rule of thumb'.


Many years ago in Scotland , a new game was invented. It was ruled 'Gentlemen Only...Ladies Forbidden'.. .and thus, the word GOLF entered into the English language.


Men can read smaller print than women can; women can hear better.


It is impossible to lick your elbow.


Q. What do bulletproof vests, fire escapes, windshield wipers and laser printers have in common ?

A. All were invented by women.


Q. What is the only food that doesn't spoil?


In Shakespeare's time, mattresses were secured on bed frames by ropes. When you pulled on the ropes, the mattress tightened, making the bed firmer to sleep on. Hence the phrase...'Goodnight , sleep tight'


It was the accepted practice in Babylon 4,000 years ago that for a month after the wedding, the bride's father would supply his son-in-law with all the mead he could drink. Mead is a honey beer and because their calendar was lunar based, this period was called the honey month, which we know today as the honeymoon.


In English pubs, ale is ordered by pints and quarts... So in old England , when customers got unruly, the bartender would yell at them 'Mind your pints and quarts, and settle down.'
It's where we get the phrase 'mind your P's and Q's'


Many years ago in England , pub frequenters had a whistle baked into the rim, or handle, of their ceramic cups When they needed a refill, they used the whistle to get some service. 'Wet your whistle' is the phrase inspired by this practice.


At least 75% of people who read this will try to lick their elbow!


Don't delete this just because it looks weird. Believe it or not, you can read it.

I cdnuolt blveiee taht I cluod aulaclty uesdnatnrd waht I was rdanieg The phaonmneal pweor of the hmuan mnid Aoccdrnig to rscheearch at Cmabrigde Uinervtisy, it deosn't mttaer in waht oredr the ltteers in a wrod are, the olny iprmoatnt tihng is taht the first and last ltteer be in the rghit pclae. The rset can be a taotl mses and you can still raed it wouthit a porbelm. This is bcuseae the huamn mnid deos not raed ervey lteter by itself, but the wrod as a wlohe. Amzanig huh?
-
Posted by Vulture at 20:50 No comments:

Slightly gutted today to find that one of my favour Blogs that I follow, Dropship Horizon is coming to an end. It has been a fabulous resource for the 15mm Sic-fi gaming community over the last couple of years and will be sorely missed.
-
Posted by Vulture at 20:59 No comments: