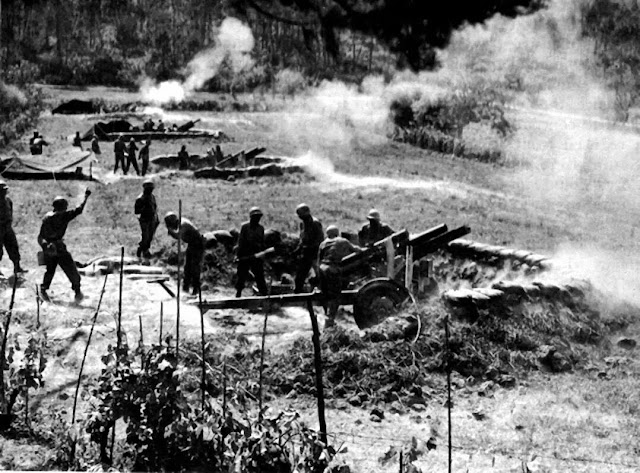 -
Comment: This weeks picture is of United States M2A1 105mm light field howitzers in action during WW2.
-
Posted by Vulture at 16:27 No comments:

I'm posting a link here to a great article on how to make your own Light Box for photographing miniatures which I read today on the Dropship Horizon Blog - Link.  Well worth a read.
-
Posted by Vulture at 19:50 No comments:

There is a new discussion and news Blog/Forum web site out there called 'The Wargames Website'.  Worth a check out.  Link
-
Posted by Vulture at 15:34 2 comments:

-
Here we have it guys !   Irrefutable proof that the right woman can bring Balance and Stability to a man's life..  :)
-
Posted by Vulture at 19:37 No comments:

The driver says, 'Christ, officer I had it on cruise control at 100, perhaps your radar gun needs calibrating.'

Not looking up from her knitting the wife says: 'Now don't be silly dear, you know that this car doesn't have cruise control.'

As the officer writes out the ticket, the driver looks over at his wife and growls, 'Can't you please keep your mouth shut for once?'

The wife smiles demurely and says, 'You should be thankful your radar detector went off when it did.'

As the officer makes out the second ticket for the illegal radar detector unit, the man glowers at his wife and says through clenched teeth, 'F..k it, woman, can't you keep your mouth shut?'

The officer frowns and says, 'And I notice that you're not wearing your seat belt, sir. That's an automatic $75 fine.'

The driver says, 'Yeah, well, you see officer, I had it on, but took it off when you pulled me over so that I could get my license out of my back pocket'

And as the police officer is writing out the third ticket the driver turns to his wife and barks, 'WHY DON'T You shut the f..k up?'

The officer looks over at the woman and asks, 'Does your husband always talk to you this way, Ma'am?'

'Only when he's pissed.'