Absolutely incredible photos from United States Edwards AFB with some sounds clips as well.  Certainly worth a look.  Link
-

Near Miss In Russia

This is one close call for the occupants of (what I assume is) a police car in Russia...
-

In pictures: Auschwitz-Birkenau, then and now

Historic home made film of the 148th Ordnance Motor Vehicle Assembly Company that was a part of in WWII. They assembled GMC trucks for the Redball Express. - -
Posted by Vulture at 13:21 No comments:

Nice looking aircraft, no doubt about it. -
Posted by Vulture at 17:58 No comments:

It's 70 years since Japanese bombers swooped on Darwin, in northern Australia, sinking Allied ships in the harbour and killing hundreds of people. For years the attack was rarely mentioned, but now the story is finally being told. Link to BBC. - Comment: This is an event I had never read about before.
Posted by Vulture at 19:44 No comments:

This is very thought provoking blog about Afghanistan written by an embedded journalist Michael Yon.  Well worth a look.  Link
Posted by Vulture at 19:53 No comments:

Luckiest Cameraman In The History Of Time

You know those times when you see something which just leaves you open mouthed....
-

Napoleon's failure: For the want of a winter horseshoe

Of all the challenges faced by generals through history, moving armies has been one of the greatest - and Napoleon Bonaparte's invasion of Russia 200 years ago illustrates just how badly things can go wrong when it is underestimated. Link to BBC.
- 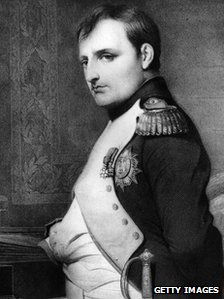 It's 70 years this week since the first US air force officer was killed in Europe, following America's entry into World War II. By heading the list of 30,000 USAAF men to lose their lives in the European theatre, Lt Col Townsend Griffiss became a footnote in the history of the war. But who was he and how did he die?  BBC  Link
- 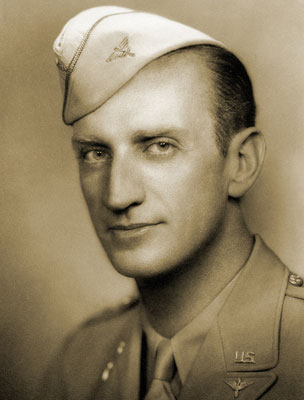 Extremely rare and striking photos of the days leading up to and after the historic D-Day invasion have been put on display, nearly 70 years after World War II's dramatic turning point.

The full-colour images, taken by photographer Frank Scherschel, display anxious American soldiers as they prepared for Operation Overlord, the code name for the Battle of Normandy.

This was one massive aircraft !  So big it could carry the weight of a B17 !  Link
- Followed a link to Table Top Miniatures Games which is a site with 'Quick, Easy Miniatures Rules for Parents and other Busy People' to download.  Had a quick look round myself, and there are a couple of sets that look perfect for my 9 year old son :)


These are classified ads, which were actually placed in U.K. Newspapers:

WEDDING DRESS FOR SALE .
Worn once by mistake.
Call Stephanie.

FOR SALE BY OWNER.
Complete set of Encyclopedia Britannica, 45 volumes.
Excellent condition, £200 or best offer. No longer needed, got married, wife knows everything.

Twenty-one German soldiers entombed in a perfectly preserved World War One shelter have been discovered 94 years after they were killed. The men were part of a larger group of 34 who were buried alive when a huge Allied shell exploded above the tunnel, near the small town of Carspach in the Alsace region in France, in 1918 causing it to cave in.  (The Telegraph)  Link & Link
- 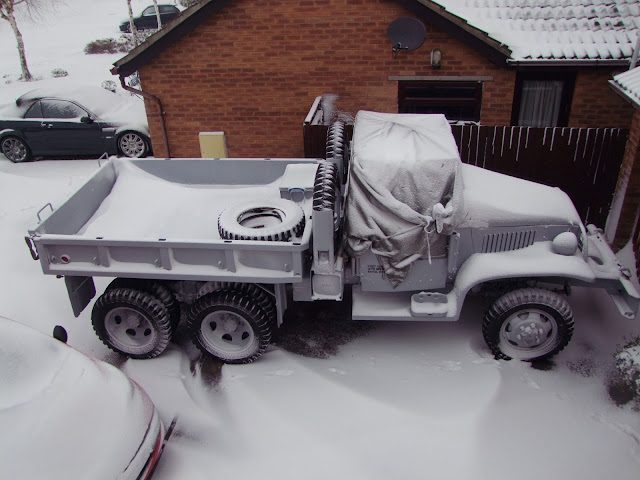 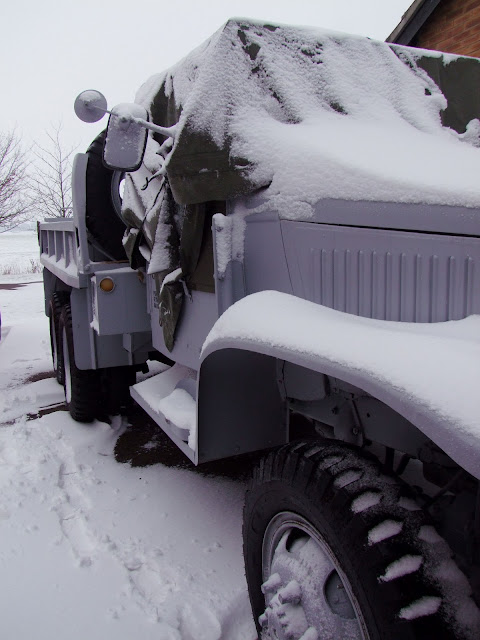 -
Initially it got in the way of me sorting out my Thermostat issue (lack of) that I posted about on 22nd Jan.  In the end I dispensed with the paper gasket altogether and used a flexy-sealant instead.  It seemed to do the job and when the engine was fired up, the engine warmed up as it should, and there were no leaks.
- 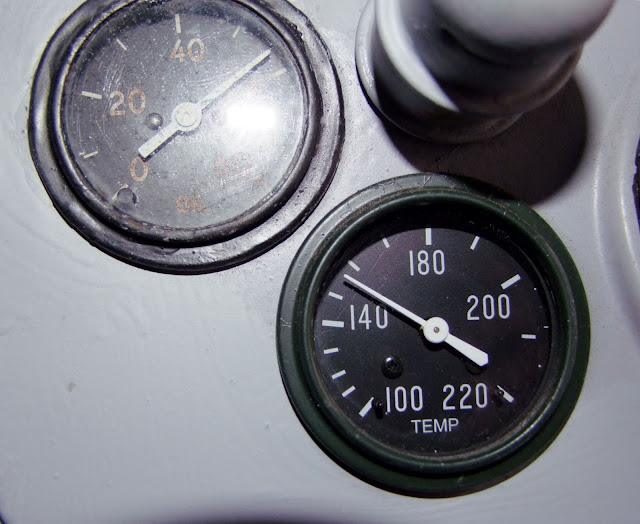 -
During the engine run I was amazed to see that ice had formed around around the base of the carb.  You can see it on this video (just behind the horn on the right side of the engine).
-

Gentlemen, can I refer you to one of my favourite Blogs (BLMA) that has an article about Joe Ekins, who has sadly passed away.  Link
-
Posted by Vulture at 08:20 No comments:

Journey of the Fellowship 2011

I am passing this on to you because it definitely worked for me today, and we all could probably use more calm in our lives.
Some doctor on television this morning said that the way to achieve inner peace is to finish all the things you have started.
So I looked around my house to see things I'd started and hadn't finished and, before leaving the house this morning, I finished off a bottle of Merlot, a bottle of Chardonnay, a bodle of Baileys, a butle of wum, a pockage of Prunglies, tha mainder of bot Prozic and Valum scriptins, the res of the Chesescke an a box a choclits.
Yu haf no idr how bludy guod I feel rite now.
______________
______________

Police in Liverpool last night announced the discovery of an arms cache of 200 semi-automatic rifles with 25,000 rounds of ammunition, 20 tonnes of heroin, £5 million in forged UK banknotes and 25 trafficked Ukrainian prostitutes, all in a semi-detached house behind the Public Library in Toxteth.

Local residents were stunned and a community spokesman said:

19 Pakistanis died in Bradford this morning

when a bunk bed collapsed.

Speaking of which, I've heard that Apple have scrapped their plans for the new children’s' iPod after realising that iTouchKids is not a good product name.
______________

Also up north a man decided to wash his sports shirt. He opens the washing machine then stops, thinking for a minute.

He shouts to his missus,

"What setting do I use on the washing machine?"

"It depends," she replies. "What does it say on your shirt?"

My small grandson got lost in the new Liverpool One shopping centre.

He approached a security guard and said, "I've lost my Granddad."

The guard asked, "What's his name?"

They Walk Among Us...


One day I was walking down the beach with Some friends when someone shouted.....
'Look at that dead bird!'
Someone looked up at the sky and said...'where?'

They walk among us!

While looking at a house, my brother asked the Estate agent which direction was north because he didn't want the sun waking him up every morning.
She asked, 'Does the sun rise in the north?'
My brother explained that the sun rises in the east and has for sometime.
She shook her head and said,'Oh, I don't keep up with all that stuff......'

My colleague and I were eating our lunch in our cafeteria, when we overheard an admin girl talking about the sunburn she got on her weekend drive to the beach.
She drove down in a convertible, but said she 'didn't think she'd get sunburned because the car was moving'.

My sister has a lifesaving tool in her car which is designed to cut through a seat belt
if she gets trapped. She keeps it in the  trunk

I was going out with a friend when we saw a woman with a nose ring attached to an earring by a chain.
My friend said, 'Ouch! The chain must rip out every time she turns her head!"
I had to explain that a person's nose and ear remain the same distance apart no matter which way the head is turned...

They Walk Among Us !

I couldn't find my luggage at the airport baggage area and went to the lost luggage office and reported the loss.
The woman there smiled and told me not to worry because she was a trained professional and said I was in good hands.
'Now,' she asked me, 'Has your plane arrived yet?'...
(I work with professionals like this.)

While working at a pizza parlor I observed a man ordering a small pizza to go. He appeared to be alone and the cook asked him if he would like it cut into 4 pieces or 6.
He thought about it for some time then said 'Just cut it into 4 pieces; I don't think I'm hungry enough to eat 6 pieces.

A noted psychiatrist was a guest speaker at an academic function where Rick Perry happened to appear. Gov. Perry took the opportunity to schmooze the good doctor a bit and asked him a question with which he was most at ease.

'Would you mind telling me, Doctor,' he asked, 'how you detect a mental deficiency in somebody who appears completely normal?'

'Nothing is easier,' he replied. 'You ask a simple question which anyone should answer with no trouble. If the person hesitates, that puts you on the track..'

'What sort of question?' asked Perry.

Well, you might ask, 'Captain Cook made three trips around the world and died during one of them. Which one?''

Perry thought a moment, and then said with a nervous laugh, 'You wouldn't happen to have another example would you? I must confess I don't know much about history.'

Traffic Camera
A man was driving when he saw the flash of a trafficcamera. He figured that his picture had been taken for exceeding the limit, even though he knew that he was not speeding... Just to be sure, he went around the block and passed the same spot, driving even more slowly, but again the camera flashed. Now he began to think that this was quite funny, so he drove even slower as he passed the area again, but the traffic camera again flashed. He tried a fourth time with the same result. He did this a fifth time and was now laughing when the camera flashed as he rolled past, this time at a snail's pace... Two weeks later, he got five tickets in the mail for driving without a seat belt..

WWII glider found in a Cumbrian field is to be restored

A World War II glider that lay undiscovered in a field in Cumbria is now being restored at the Regimental Museum in Carlisle Castle.
It is thought the Waco glider was used to carry Border Regiment troops into Sicily and was then crated up and shipped back to Britain.  Link
-
Posted by Vulture at 17:16 No comments: