A message in a bottle delivered to a Confederate general during the American Civil War has been deciphered, 147 years after it was written. This is quite an interesting article on the BBC web site. Link.
-
Posted by Vulture at 08:11 No comments:

Just completed a Walker I bought some months ago. Made by Blue Moon Manufacturing it is from their 15/18mm Vehicle range. The body is resin, and the legs and arms metal. It went together fine (some drilling is necessary), and I'm reasonable satisfied with the result. In size it is very similar to the Critical Mass Walkers. Rather than going for the 'new out of the factory look' of some vehicles, I opted for the weather-beaten look.
- 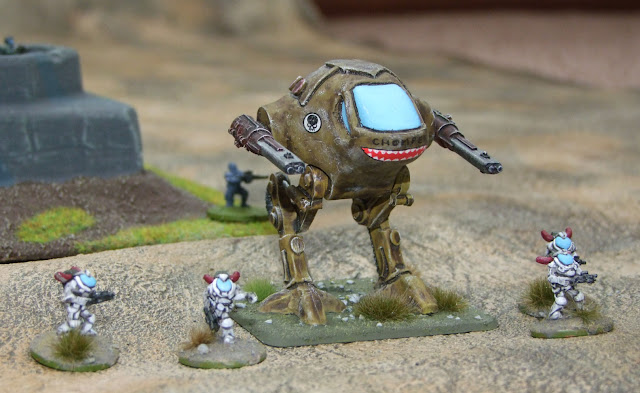 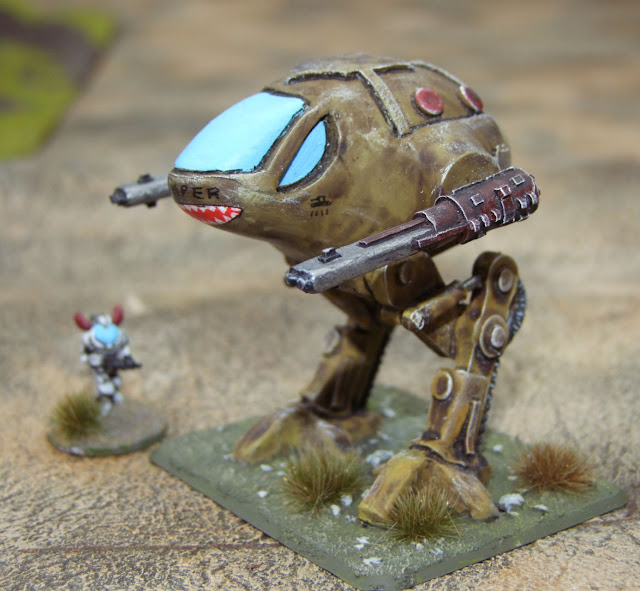 Stumbled across this interesting blog which is dedicated to vintage wargaming. Well worth a look, and one I shall be following. Link
-
Posted by Vulture at 10:57 No comments:

I was a massive fan of the first Combat Mission ‘Beyond Overlord’ that the company Battlefront released 2000. For me this was just a fabulous PC wargame in the main because of its suitability to play by E-Mail. The big news is that battlefront are releasing a follow up, called Combat Mission ‘Battle for Normandy’ . There is no firm release date yet, but this is definitely one to watch. Link
-
Posted by Vulture at 14:40 No comments:

Quite by accident I stumbled across this rather good little site all about British battles. Link
-
Posted by Vulture at 00:05 2 comments:

In 1993 I read Rosemary Sutcliff's historical adventure novel The Eagle of the Ninth (1954) which tells the story of a young Roman young Roman officer searching to recover the lost Roman eagle standard of his father's legion in the northern part of Great Britain. The story is based on the Ninth Spanish Legion's supposed disappearance in Britain. I bought the novel on a trip north to see an old school friend of mine in Scotland. My wife and I were driving along part of Hadrian's Wall and stopped at one of the many forts where there was a tourist information centre, and that's where I picked the book up. The weather that March day was dreadful with torrential rain hammering down, and I remember thinking what a god forsaken spot the wall must have seemed at times to those Roman soldiers who were used to the sunny Mediterranean weather. It was a novel I greatly enjoyed, so I'm looking forward to seeing the recently released film 'The Eagle' which is based on the book.
-

Lost city of Atlantis, swamped by tsunami, may be found

This is quite an interesting posting by Reuters. A U.S.-led research team may have finally located the lost city of Atlantis, the legendary metropolis believed swamped by a Tsunami thousands of years ago in mud flats in southern Spain. Link
-
Posted by Vulture at 08:01 No comments:

On The Miniatures Page (TMP) a new message board has been created for those interested specifically in 15mm Sc-Fi gaming. Link
-
Posted by Vulture at 14:26 4 comments:

Found this review of the up and coming next release for the Dawn Of War 2 computer game on U-Tube. Beautiful :)
-

Why is King John the classic villain?

This is quite an intersting article about the medevial English monarch, King John on the BBC web site. Link
-
Posted by Vulture at 12:27 No comments: